Whatever you think you can do or believe you can do, begin it. For in action there is magic, grace and power – Goethe

I came across this quote, strangely enough, in a book on Zen flower arranging. It seems to be one of those popular quotes that are dragged up for use in almost any circumstance. Still, something in it spoke to me. I can’t say that I particularly go for the term magic – I am pretty sure that the power of action doesn’t come from a supernatural source, just from a source which for the most part we neglect or fail to comprehend, and maybe after all that is what more accurately characterises what we tend to call magic. However, power and grace I can go with. And the quote is particularly helpful for me just now.

I have, and as long as I can remember have had, a sense of anxiety as my background emotion – it seems to be almost programmed into my body, and at something like an operating system level come to that. Sometimes it is relatively quiet, sometimes it can lead to a quite debilitating fear. A lot of people find this hard to believe of me as I have done things and held responsibilities that many people seemed to find terrifying. I had little problem with them as the outside threat seen by others was nothing compared with my inner fears.

Life is much quieter for me now; the anxiety and fear remain, and if anything are more noticeable without the distractions of external pressures. Still, action is the antidote to fear. Sometimes any action will do. Sometimes it is an achievement just getting up in the morning, getting dressed, feeding the cats, lighting the stoves and milking the goats. Beginning these simple tasks can dispel the fear. At other times there is one particular task calling me to be worked on which, for some obscured reason, becomes the focus of my fear. Then I can find myself becoming exceptionally busy on just about anything that avoids me having to look at the one thing I need to be doing. Beginning this one thing, in the face of the fear, is where the power and grace lie.

In some ways knowing all this helps to stop other things in the future becoming immobilising with the fear they bring. Sometimes, though, the fear and avoidance seem to creep up unnoticed and for a while action seems impossible – but it isn’t. And, nervous as I am to disagree with Goethe, I am relieved to say that often I don’t even have to feel or believe I can do something – just starting is all that it takes.

Recent postings on Jade Mountains have got me reflecting quite a lot on how we can be driven by influences that end up being not good reasons for doing things.

It seems that there is often some deep hurt or sadness inside us that makes us want to help or heal or somehow change the world and put it to rights. I am (often deeply) disturbed by the question What am I doing about it– where the it can be whatever we personally are drawn to, which for me has included the abuse, prostitution and trafficking of children; decimation of ancient forest, woodland and wilderness; the pain and suffering of members of my – quite extended – family.

Letting go of this disturbance and the craving to help seems to need an honest and direct looking at what is driving us. And sometimes what we need to look at triggers a deep hurt and even a sense of despair. Not looking somehow leaves the hurt and despair driving us, and yet the looking can be heartbreaking. I was once told by a senior monk that yes, it could be heartbreaking and actually sometimes it had to be – the breaking made an opening for the compassion to flow through us.

And from this it seems to me now that there can be a move not so much to grand heroic initiatives and world changing grand plans but rather to small acts of kindness. The horizon of our concern comes down to the personal, direct and immediate – I spend time with my family, I go and work or just be in the woodland, I try to respond as best I can to whatever calls for help come to me.

As a treat for ourselves, Sunday night is typically pizza and dvd night – anyone staying at the farm is invited to come and have pizza with us and watch a film. Sometimes we buy a takeaway pizza, more often we make our own.

On a recent Sunday I decided I wanted to make the pizzas. There were only three of us – an unusually small number for the summer. Anyway, it took me three and a half hours to make three pizzas and I have been wondering about this for some time since. Why did it take so long? well, I had to light the wood-burning stove and get it up to temperature; I milked the goats and made mozzarella cheese with the milk I got; I harvested, washed and prepared our home grown spinach, courgettes (zucchini) and tomatoes to go on the pizza along with the salad to accompany it; then I cooked the pizzas.

Now there are some people who visit us who think this degree of self sufficiency is idyllic, and there are others who think it is unnecessarily hard work and even downright pointless. For me it is a part of how I currently choose to live my life. And still there have often been doubts as to whether I could be doing something ‘more useful’.

These doubts frequently arise from the knowledge that some people who are really close to me think it is a waste of my talents to be spending large parts of my life in this way. This is something I have known for a long time and it has been a helpful challenge to my sense of what seems good for me to do; and yet it has until very recently been a continuing trigger of unease, insecurity and considerable self-doubt.

The reason this has been bugging me for a couple of weeks now, though, is something different. It is the difficult realisation that in our practice there is no possibility of justifying what we do. We can construct a rationalisation to justify a lifestyle if we want – but it doesn’t help. Sooner or later we have to let go of this deep need for self-justification, and for the seeking of approval of those close to us, and just do what seems good to do there and then – with no guarantees that it will still be the good thing to do next week, or even tomorrow. And sometimes there is a longing for an easier practice with a set of rules, or some authority figure that can say what is good and what isn’t – even if I know I couldn’t help but rebel at such authority. Reverend Master Jiyu described our practice as being one for spiritual adults; and sometimes we can still find ourselves craving not to have to be grown up. 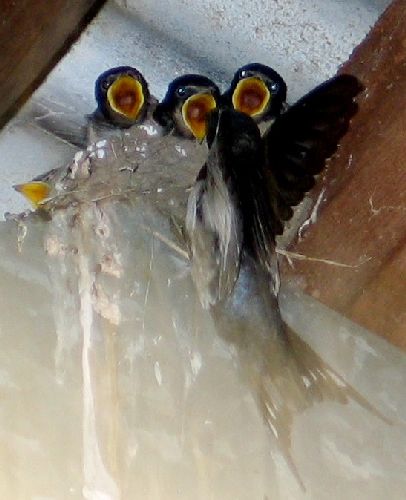 It seems that there is a direct correlation between how messy my workshop is and how depressed I feel. I have often yearned for an unmessy workshop – convinced that then everything in my life would be ok (and of course I would then also, miraculously, be amazingly well organised with my time and workload).

So I have great delight in sharing the fact that parts of my workshop are currently a real mess and yet I feel thrilled by it.

Swallows are nesting in the roof beams and there are four baby swallows making one heck of a racket. Swallow parents are in and out every 30 seconds or so feeding. All are totally unbothered by my bandsaw, drills or hammering of chisels.

Any moans about how busy it can be for us on the farm are firmly put into context by seeing the demands on the swallow parents by their four very large babies.

And I have had to remove all items from underneath the nest until they fledge. 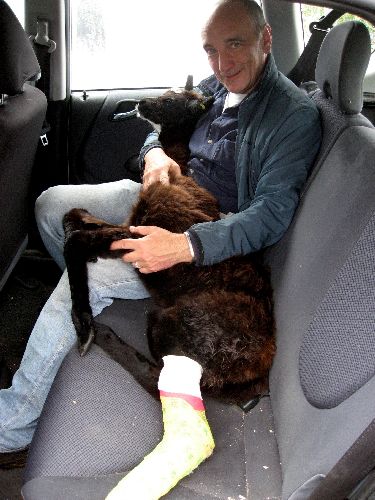 Improvised ambulance.
More from the alpaca front! Checking for birthing alpacas at 7.00am and yes, there is one going into labour. Unfortunately there is another – a 6 week old female – who is lying down when she usually jumps up when I go past. I go to check her and she jumps up but looks a little strange – as though her leg has gone to sleep. Closer inspection reveals a broken leg hanging from halfway down.

So – all hands to decks. Baby lifted into farm buggy and driven to barn. Following consultation on phone with vet it is baby into back of car and off to vet’s surgery. Left with vet while back to check birthing alpaca…

I used to look forward to excitement, now I am not so sure.

But the abiding memory of the day was the deep trust that the injured alpaca had in us. She lay across Julie in the back seat of the car on the way to the vet and across me on the way back. She was perfectly capable of jumping and twisting and wasn’t in shock – she just chose to trust us.

I am finding that the interaction with animals can be a deep teaching. I have no expectations of animals; I am more a ‘people person’. And it seems that the absence of such expectations can leave us open to them sneaking in and catching us.

By the way, all are doing well – though how do you keep a plaster cast on a lively young alpaca clean and dry??