There is no single temple on Mt. Hiei known as ‘Enrakuji’ – the name is used for the whole complex of temples that can be found along the summit ridge overlooking the city of Kyoto to the south and Lake Biwa to the east. The temple was founded by Dengyo Daishi in 788 and although this has always been the Head temple of the Tendai sect in Japan many of the most important priests who founded other Buddhist traditions also trained here.

Dogen came to Mt. Hiei as a young trainee monk in 1212 and took the Bodhisattva Precepts the following year. The building used for this ceremony was the Kaidan-in (Ordination Platform Temple) completed in 828 and still probably much as Dogen would have seen it. It’s an important site in the history of Buddhism in Japan too as the formal separation of Mahayana Buddhism from other schools was first announced here.

Dogen is mainly associated with the Yokowa area of Enrakuji to the north of the main To-do and Sai-to temple groups. Few of the buildings he would have recognised survive – most of the original temples were destroyed by the shogun Odo Nobunaga.
By Iain. 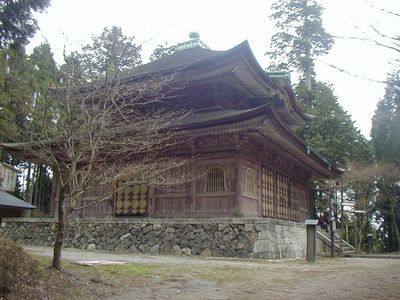 The Kaidan-in where Zen Master Dogen was Ordained.

One thought on “Dogen’s Ordination Platform on Mt. Hiei.”