Horyuji is the Head Temple of the Shotoku sect.

Horyuji is about 12 miles south west of the city of Nara. The temple was one of the first to be built in Japan and it’s early history is associated with Prince Shotoku who introduced Buddhism to the country. In 1993 it became the first site in Japan to be designated a UNESCO World Heritage site.

Three areas within this very large complex of buildings and grounds covering more than 300 acres are open to visitors. The Saiin Garan (Western Precinct) is the best preserved as a set of buildings and contains what is thought to be the world’s two oldest surviving wooden structures – parts of which survive from the sixth century. The Kondo (Main Hall) houses a bronze Asuka period statue of Shakyamuni cast in honour of Prince Shotoku, and next to it stands the Goju-no-to, (Five Storey Pagoda), another sixth century building.

In the centre of the site is a modern gallery and museum completed in 1998 containing many early Japanese Buddhist statues and other treasures. 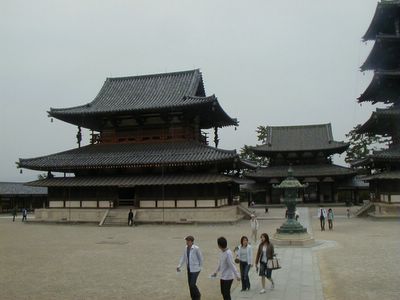