Kenninji is very close to the Kyoto’s main shopping centre, just to the east of the river and south of the Gion entertainment district. It’s not one of Kyoto’s best known temples but it provides an oasis of peace in the centre of the city. Founded by Eisai in 1192 it was the first place in the capital that taught Zen and is still an important temple for the Rinzai school.

Today Kenninji consists of groups of traditional and austere buildings surrounded by some classic Zen gardens. On the ceiling of the meditation hall there are some fine pictures of circling dragons.

Dogen probably first came to Kenninji in 1214, and came to study there under Myozen between 1217 and 1223. He was also based at the temple for three years when he returned from China. 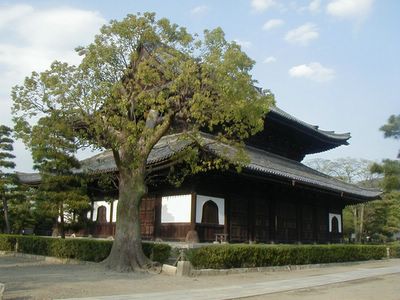