The following is an attempt to point out the significance of allowing goals, large or small, to give way to flight. Light, strong, vibrant, unfettered and informed by clear intention. This photograph, and the one published yesterday, speaks louder than anything I might say, however I’ve given it a go. 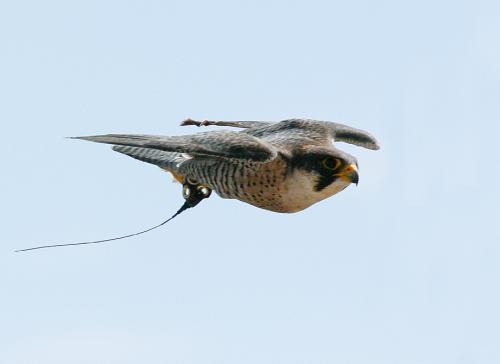 Peregrine, by Tony
To pop this image of the Peregrine, wings so perfectly gathered, so light yet so strong, eyes and whole body directed with clear intention might seem a fluke of timing. Would, however, the next moment capture something fundamentally different? Here the bird is caught bright eyed and…oh I don’t have the words for it right now. Beautiful though. One sees that something in infants and athletes, and others where body-mind is clearly communicating and moving with fluidity and grace.

Thinking further, could it not be that we humans are not so different from the birds with respect to intention – clear intention? Or at least the potential for clear intention; the expression being light yet strong. Here’s the thought, and sorry to be banging on about this. The photographer sets out with the intention of taking photographs. As the eyes take in what comes to them in the present, the goal (a photograph) slips into the background of awareness. Another example: you have an intention to drive over to the priory and that’s the direction one is going in, the goal of the trip. Then as one goes, letting the goal slip into the background, more subtle moment to moment information is able to impinge on the mind. And because the goal is less to the fore, and thus less of a distraction, the information coming in can be responded to appropriately, more readily and finely. One is especially able to act on the more subtle stuff. For example one inexplicably find oneself slowing down and then moments later finding that if one hadn’t, in the split second way of things, a lorry going too fast would have wiped you out on a blind corner in a narrow lane. Not to mention those blessed promptings such as remembering as one starts the car that the front door’s not locked! Less driven by goals, more likely to…fill in the blank. Goals are not bad, they just need to slip into the back seat, so to speak.

This is all really obvious and mostly taken for granted and out of immediate awareness. Perhaps this level of sensitivity to information only comes to light when, highly distracted, the front door IS left unlocked and one is prompted, once again, not to get ahead of oneself. This is the stuff of training in daily life a phrase we use presuming we share a common understand of what that involves. Do we though? Just what IS that training. Of course the details are unique unto each of us. However, like the bird, we need to give way to flight. Light, strong, vibrant and with clear intention.

The underlying intention of training in the way of the Buddhas is remaining true to that which the Precepts point towards. Thats a direction worth following I’d say.

11 thoughts on “Intention And Direction In Daily Living”