I offer this incense in memory of the Great Priest Houn Daizui, the second Head of our Order, and a true friend to all who knew him. As we return to our temples and sitting places I pray that we carry with us, what I know would be his wish: That the Sangha flourish, be harmonious, and continue to transmit the Truth of the Buddhas and Ancestors.

This memorial ceremony marks the end of a ten-day gathering of Order monastics from Europe and North America at Shasta Abbey in Northern California.

I retrieved the following from the Internet Archive Wayback Machine and republish here as a record of where and when Jade Mountain(s) Buddha Hall came into existence. Bit of history; much has changed since I wrote this.
Mugo Dec 2, 2012

Rev. Mugo White is a disciple of the late Rev. Master Jiyu-Kennett, having been ordained by her at Shasta Abbey in 1981. Rev. Mugo became a Teacher of Buddhism in 1989 and, in 2000, was named a Master in The Order of Buddhist Contemplatives.

Since 1996 she has served as the international OBC Lay Ministry Advisor.

During the past ten years or so, due to circumstances that unfolded within the Order, I have been traveling a great deal. While priests of the Order do travel they are usually based in one place, the majority live in a monastery. I make this point lest a reader mistakenly think that what I describe below is the norm. Physical stability, especially in the early years of training, is considered to be important in growing spiritual stability.

In late 1993 I left Reading Buddhist Priory in England, where I had served as prior for about three years, and went to Shasta Abbey to assisted my master until her death in 1996. From then I was based either at Shasta Abbey or at Throssel Hole Buddhist Abbey. In early 2000 I moved to Cornwall, England while caring out my monastic responsibilities as a priest of the Order in Europe and North America. At that time a 25 ft. trailer, on property belonging to lay sangha members near Helston, served as my ‘monastery’. I understand, in the time of the Buddha, even a grass-thatched hut would be regarded as a monastery. This being so, and it being our custom to give one’s residence a name, I called the trailer Jade Mountain Buddha Hall. The trailer and its surroundings provided a safe haven to which I have returned for months at a time.

How the Site Got its Name.

The name Jade Mountain Buddha Hall came to me one day in late 2000. In Zen, we have the term ‘mountain still sitting’ and Jade Mountain seemed an appropriate name for my trailer. Over time, and due in large part to my being on the move, the name ‘Jade Mountain’ has become less linked to a physical location in Cornwall and more to me as a priest. This being so, and there being a need for sangha members to find me somewhere, I set up this site.

The Purpose of the Site.

I am committed to the Serene Reflection Meditation Tradition (Soto Zen) and to passing that tradition on to others. This site is one way of doing that. There are articles offering spiritual encouragement, personal insights into training in daily life as well as ones explaining the forms and practices of this tradition (as they have been passed on to me). Jade Mountain is my ‘personal web site’. The views expressed are mine and do not necessarily represent those of the Order as a whole.

May the merit accrue through creating and writing for this site be offered in eternal gratitude to my parents, Dorothy and Tony White, and to all beings.

I used an ex US Army entrenching tool this morning. It was good to do some physical work for a change since I, of necessity, spend a large part of my day using a computer. The task at hand was to break up and clear away a ridge of gravel and earth on the side of the road created by a snowplough in the spring. The ridge was in the way of getting a good wide swing around into the drive, so I ‘had at it’ with the entrenching tool. The ridge was baked solid by the Idaho summer heat. The sharp end worked well to 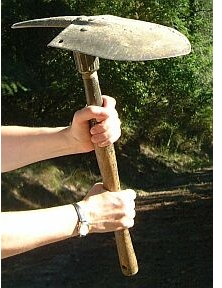 break up the concrete-like obstacle. The spade was good for breaking down the remaining lumps and moving the dirt to make a smooth surface to drive over. Half an hour later and the obstacle on the road had been dealt with. An obstacle, a simple tool, applied effort, obstacle smoothed out, the road cleared.

I’ve been pondering the first entry for this web site. In fact, I have been pondering the whole question of persevering with a web site. It has, at times, seemed a daunting project especially for one with no previous experience in this field. This morning, while I was breathing in the dust on the side of the road, one potential purpose for the site came to me. It was to do with roads and obstacles and ‘taking the next step’. The other part was ‘insights’, those thoughts that pop into consciousness to inspire, teach and encourage. They come, are learned from and then forgotten, however, some times they are worth repeating.

Some years ago my mother asked me to choose some books from the mobile library since she and my father would be away shopping when the van turned up at the gate (this is a system in rural England where the library comes to you). “What kind of books do you like,” I asked her. Stories about people overcoming great difficulties – biographies, she replied. I related this book choice to a fellow monk who, it would appear, knew my mother better than I did. She likes them because she has to overcome great difficulties herself! In my eyes, she had been a tower of strength throughout her life. It hadn’t consciously occurred to me she had grown strong through working hard and enduring tough life circumstances. My mother was an avid reader; she read for personal inspiration and did so to a ripe old age.

So, these pages are here, hopefully, for spiritual inspiration; inspiration to keep travelling the road and overcome difficulties. They also provide information and insights; information about the practice of the Serene Reflection Meditation Tradition (Soto Zen) and insights into how that practice unfolds in daily life.

May the spiritual merit accrued creating and writing for this site be offered in eternal gratitude to my parents, Dorothy and Tony White, and to all beings.