In 2005 I was witness to the training going on here at Eiheiji. We, the late Iain Robinson and I were escorted everywhere and left in no doubt as to where and what was expected of us. Interesting, informative, educational, and stressful! The highlight for me was being invited to offer incense at the main altar during Morning Service. All very formal, we survived! I thought readers would want to view this ‘window’ on how young monks are trained to be priests in Japan.

Eiheiji is a world-famous Zen monastery located in the mountains 200 kilometers northeast of Kyoto. As the temple’s founder Dogen prescribed, the core practice is zazen: simply sitting to calm the mind and examine one’s self. Most of the 150 monks are in their 20’s. They live at the temple, devoting themselves to uninterrupted Zen practice. With unprecedented access inside this remarkable temple, where Dogen’s teachings have been practiced unchanged for over 770 years, the program follows the monks’ lives over the course of 6 months.

Update May 2021 – the video referred to above is no longer available. There are however a number of films showing the training going on at Eiheiji.

Republishing this from 2013. Tomorrow, October 15, 2017, at Shasta Abbey we celebrate the Festival of Great Master Bodhidharma. How time does fly. 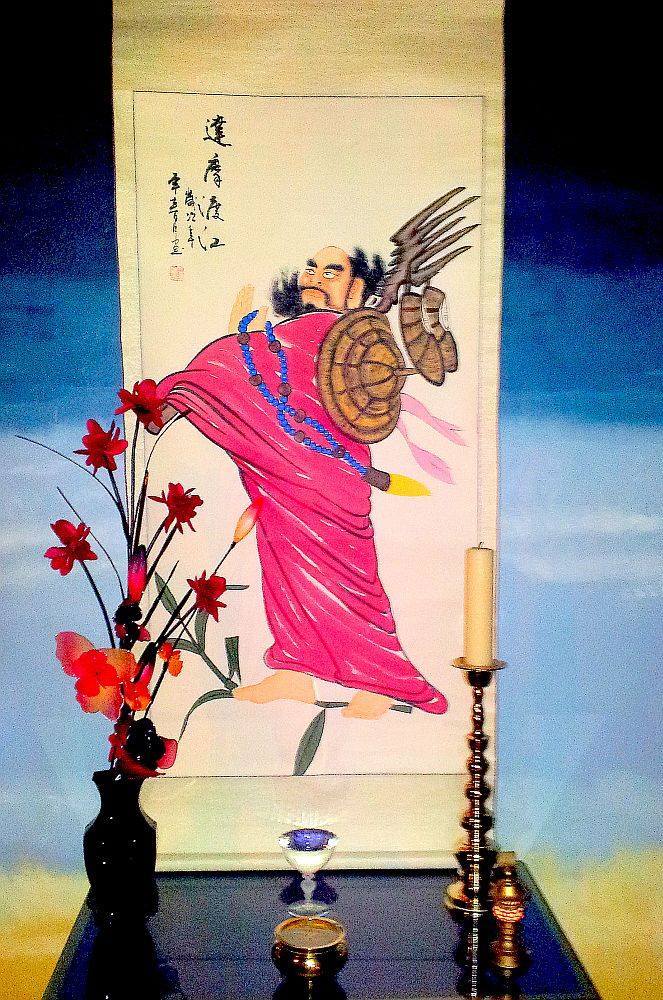 Beyond this mind there’s no Buddha anywhere. The endless variety of forms is due to the mind, but the mind has no form and it’s awareness no limit. Unaware that their own mind is Buddha people look for a Buddha outside the mind. To seek is to suffer. When you seek nothing you’re on the path. To give yourself up without regret is the greatest charity.

Words drawn from: The Zen Teaching of Bodhidharma, Translated by Red Pine

Today we remembered Bodhidharma during a ceremony dedicated to him and his teachings. The above was read out at the start of the ceremony for all to hear. It struck a chord.

Turn around
the light
to shine within,
then just return.

And do turn around and take a look at the shining light coming from your screen as you read Rev. Alicia’s blog. For the last little while she has been reflecting on and teaching about the Buddhist Precepts. Sitting Buddha Hermitage – Blog is the place to visit, read and take into your Heart.

You can see the full poem Song of the Grass Roof Hermitage here.

Faith traditions invariably have teaching, based on faith/belief, around what happens when somebody dies. Hopefully such teachings bring comfort to those who are grieving as well as strengthened faith in those approaching death themselves. Buddhism has a number of schools or traditions with similar yet different teachings around what happens. Personally I don’t feel a need to know!  However I’m able to offer meaningful thoughts to the grieving which tend to focus on living and the departed persons life.

I was out walking just now pondering on this whole subject. It would seem we (in the West) are held in a dynamic tension between verifiable scientific proof as to what happens and real-time imaging/the visionary (including visionary dreams). My experience around death, which I do not take as fact, tends towards the visionary. This all is coming to mind since there seems to have been a lot of death in the family lately.

Rev. Master Jiyu-Kennett, my teacher, died eighteen years ago on the 6th November 1996 here at Shasta Abbey. She’d had a really bad cold for three days and finally on the third day around 2.00 in the afternoon her system gave out. On that day and generally around that time a number of us noticed how up-beat we seemed, joyful even. We refer to one who has died such as Rev. Master Jiyu as entering Eternal Meditation and in a certain way we all joined her there. How could there not be collective joy and celebration?  Yes, and at the same time there was sadness at the person of our Masters’ leaving us.

Around this time of year there are ceremonies held within our religious order remembering Rev. Master Jiyu and Shasta Abbey was no exception. Invariably memories of that time are very personal as is the case around any death of somebody close, or one of our animal companions too for that matter. These are my memories.

Last Sunday morning a Memorial was held for Rev. Jiyu which included a separate ceremony at the site where she is buried, marked by a majestic white stupa with a smooth paved area  surrounds the stupa. Everybody present, lay and monastic, went out in procession to the stupa site and sang scriptures as we walked around (circumambulated) the stupa a number of times in honor of the one interred beneath. As we sang together in the crisp sunny morning air I was taken back to the actual burial ceremony, eighteen years ago.

I was one of the two officiating monks for the burial and chose to wear the black novice monk kesa Rev. Master wore when she was a novice in Japan. It was a huge honour to wear her robe and of course being asked to be one of the celebrants. It was freezing cold, I had a well developed cold as did several other monks. I felt like death! A monk stood close by with extra tissues and cough sweets as we stood on the uneven newly dug earth facing the end of the ceremony hall with Mt. Shasta behind. The ceremony went on for perhaps two hours with scriptures being repeated over and over as everybody, quite a crowd, put a spade full of earth on the coffin. I might have been a bit delirious by the end of it all, possibly during the ceremony as well! Was I seeing things?

Returning now to last Sunday. I was standing in much the same place I’d stood at the burial with the tip of Mt. Shasta white with snow peeking out from behind the meditation hall building with blue sky above. Around me I sensed a crowd gathering among the surrounding trees, larger than the one physically present. In the sky there appeared a lively sense of beings riding on large birds, flying freely and joyfully. I didn’t look up. Didn’t feel the need to. Didn’t concern myself as to whether or not I was seeing things, again.

Yep, there is more to death than dying and I guess we will all know what that is when our time comes. Until then let us fully appreciate the lively sense of being physically alive while going about our day, and when in repose too.

This post is for the brother of one of the monks who is getting closer to death by the day. May he find true peace.

Audio Recording: Rev. Master Koten Prior of Lions Gate Buddhist Priory British Columbia, Canada gave a talk after the ceremonies last Sunday. The title of the talk is: To View The Morning Star. The Reverend speaks about Rev. Master Jiyu; giving teaching about training with a master and about training generally. It lasts just over one hour and rich with Dharma and best listened to while sitting quietly. Not for example when out jogging or driving or while doing the dusting or washing the dishes! Just a thought.

From the Eihei Koroku – Dogen’s Extensive Record. Another gem from this huge tome.

and that, you might think, was the end of that but no…
After a pause Dogen said:

Within seven tumbles and eight falls we still take up and use [meditation]. Both “no desire” and “no dhyana” are not true. In steadfast immovable effort there is nothing to seek. How can this be equated with the three realms [of desire, form, and the formless]?

We are constantly being pointed to ‘going on beyond’. No resting place and no ‘stumbling’ place it would seem.