Last night, at the group meeting at Reading Priory, somebody asked a question about karmic consequence. The example used was of a woman who had been waiting at a bus stop in London. She had cursed the bus driver for not stopping to pick her up. The bus was, shortly afterwards, blown up in the recent bombings in the capital. We generally pondered the conditioning effects actions; of body speech and mind have on future acts. One can only offer merit to this woman who most likely feels both, glad the bus didn’t stop, as well as badly for having cussed somebody so close to his bus being blown up and many of the passengers being killed. She might, after all, have been one of them.
Footnote: The young boy travelling beside me on the train informs me that the driver of that bus survived the blast. He was in such shock that he wandered for some miles before finally checking into a hospital for treatment.
It is now all the more poignant to hear, from a fellow passenger travelling on the train, that there have been more bombing in London this very morning. This news leaves me numbly gazing out of the train window at Cornwall as it’s green rolling fields and lush green trees flash past. These bombings certainly bring to mind impermanence…and the need for nurturing compassion in the world.

In the news around the time of the bombing there were a number of stories of people who for one reason or another expressed regret. Regret for not helping somebody in need choosing to run for safety instead. Regret for even surviving when so many were hurt or died as a result of these bombings. I can’t help but think of the people on this train, many of them got on in London, they could have taken a latter one, they could have been caught up in to-days bombings. These are the kinds of thing that passes through ones mind. The realization that physical life can be so easily, and quickly, ended.

June and Mark on Saturday and Ian and Rachel on Wednesday. They made their solemn vows and were married at Reading Buddhist Priory with Rev. Master Olwen, the prior, officiating. If somebody had told me that the priory could contain forty plus people at once, all in one room, I’d have been doubtful. These two weddings proved it possible, just!

I’d been invited to witness these two weddings and although I’d originally not planned to attend them my schedule in the UK is flexible enough to allow for change. To go seemed good to do. So last Saturday I caught the train from Exeter, where I’d been staying with Rev. Master Myfanwy at Dragon Bell Temple, to Reading near London. I was glad to be present and to personally wish these couples well in their lives together and to join in the celebrations with their family and friends, many of whom had not been to a anything Buddhist before.

Years ago I attended the annual religious conference at Atlantic College in Wales. The youngsters at that school, along with the religious teachers, were invited to ceremonies from different faith traditions with a view to nurturing tolerance and greater religious understanding. One evening we had a Shabbat Supper, a ceremonial meal within the Jewish tradition. The wife of the officiating rabbi gave some orientation to help us be at ease. She explained as follows, “When you attending a friends wedding you go and participate whole heartedly. However when you leave you do not end up married!” She continued, “So it is with our meal together. Please do join in wholeheartedly, and at the end of it be assured, you will not be a Jew”! This helped tremendously and I have used her words at occasions, such as weddings, to help non-Buddhist relax in the unfamiliar Buddhist setting and ceremonial.

As it happened, at one of the weddings this week, there were people of the Jewish faith. The bride had already mentioned that she was slightly concerned about how her Jewish father would respond to being at the priory. During the ceremony, out of the corner of my eye, I spotted a gentleman who at first seemed far away and who then gradually entered into the ceremony as it proceeded. It was touched to catch a fleeting sight of his soft face turned towards his daughter as she made her vows. I related this latter and was told that hearing of her fathers attention was ‘the best present she could receive from him’. I was glad to be able to pass on what I’d observed.

On route from Exeter to Reading, and now on my return journey to Cornwall in what is called the West Country, the train passes through Taunton in Somerset. It is a special place of remembrance since my father died on the platform just before meeting me off a train in January 2000. At that time, as my trained pulled out of the station, I was silent witness to a touching scene. I observed from across several tracks the paramedics arrive and attempt to revive a gentleman, unknown to me at the time. Considering the odds of being present at the time of my father’s death, given my tendency to travel, I am always so grateful for what happened in Taunton since I was able to be there for him. There, even though I didn’t realize it at the time! I was also conveniently placed to attend to all that follows the death, identifying the body followed by funeral arrangements. My father and mother are buried in the grounds of Throssel Hole Buddhist Abbey in Northumberland.

Each time I pass through Taunton on the train, as I have just done, I remember my father with great gratitude. I also remember with a smile, at the circumstances of his death, he would have smiled too!

So there we have it ‘Two Weddings and a Memorial’! For those who don’t watch movies the title of this posting is a sideways reference to ‘Four Weddings and a Funeral’.

Last week I visited this stupa in Birmingham where a portion of the Buddha’s relics are enshrined. It is said that the relics will literally increase in amount if offerings are made. What that means is coming and paying ones respects to the memory of the Buddha and making offerings of flowers, candles, food and incense and other good things. One also makes an offering of bows out of gratitude. In Taiwan I heard that thousands of people came to pay their respects to the Buddha relics when they came, as part of a world tour, to one of the large temples. It is also said that the relic will dissapear if they are forgotten. 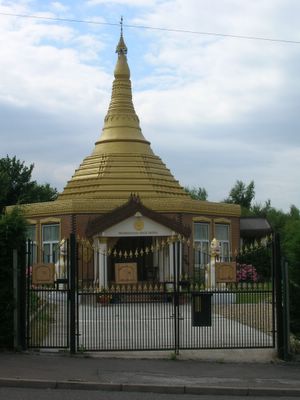 The Buddha relics are enshrined in the base of the Pagoda. 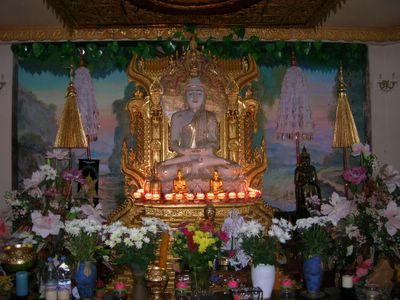 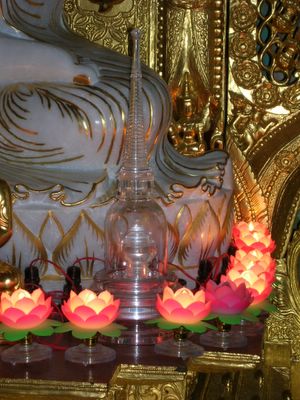 The reliquary on the altar contains a portion of the relics.

A final reflection: I note that sceptical doubt is like muddy water causing one not to be able to see things as they are. The question of the authenticity of these, and other such relics, falls by the wayside in the light of this teaching.

For more information about the Birmingham Buddhist Vihara and Dhammatalaka Peace Pagoda go to www.birminghambuddhistvihara.org

Thank you Karen for the use of your high speed line to get this blogger entry onto the internet.