I’m on the road in BC on route for the week-end retreat at Lytton. The problem with the site is being looked into by our reader in Singapore.

…and at the advice of Iain in Japan I removed the photo in the previous posting and everything came right again. Who know what that was all about, I’m just glad everything looks like it normally does now.

I received this photo and account of being on a tour to China via email recently. Reproduced here with permission. 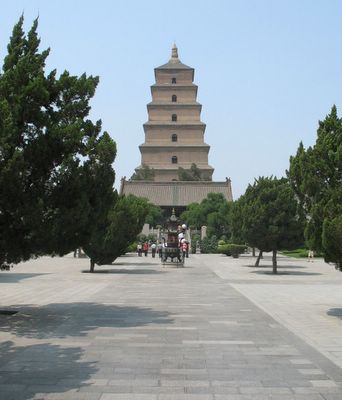 Dear Rev. Mugo,
It was a very good trip, but not what I expected. I was disappointed to learn upon arrival that we would not go to the Ling-Yin Monastery as indicated in the itinerary, apparently the company has had complaints from tourists about seeing “too many Buddhist temples” although I think our group would all have found it interesting. We did go to the Big Wild Goose Pagoda in Xian and I offered incense and lit 3 candles in the front, and climbed to the top of the pagoda. The scriptures (brought from India by and translated by Xuan Zhuang, 7th c. AD) were all hung on the walls, but written in Chinese, and so I wasn’t able to know what they said. In one of the side buildings, there was an amazing mural made of lacquer and jade in 3 full wall panels depicting the life of the Buddha, a wonderful teaching tool. I don’t know how old it was but it was very impressive. I didn’t have a chance to talk to or see any monks at that temple, but purchased some items in one of the shops on the grounds. We also went to a Taoist park in Hangzhou, which was interesting to see, with statues and other sculptures offering opportunities for good luck wishes.

My general impression of China is that it is experiencing major changes in their social and economic structure, and hopefully becoming more accessible to Westerners. I did see many Buddhist objects in all of the shops we encountered (way too many shops, in my opinion!) but because I was on a commercial tour, very little attention was paid to any of the religious practices of the Chinese people. I did notice how the three major religions of Buddhism, Confucianism, and Taoism seem to be blended a lot in the culture.

Our tour focused on historical sites and cultural experiences, primarily. We ate well, had very good hotels, excellent guides, and comfortable travel accommodations. I would have preferred less shopping opportunities and more sites, but I guess that is part of that kind of tour. (I’ve never been on a tour before…) I’m very glad I went, and if I were to go again, I would do it differently, focusing on Buddhist temples.

Thanks for this. It just shows how very different your tour in China was to my journey last year.

These past couple of days I’ve been commuting to the apartment from the home of congregation members who are hosting me. It’s a whole new way of life; gathering everything for the days work in bags the night before, checking to make sure I’ve keys to get out of the house, to get into the car, to unlock the steering wheel lock. (We are taking no chances with getting the car stolen again). And then there’s a key to get into the apartment building, another to get into the apartment itself. Hello #206, at last! Keys, keys and more keys. What would we do without them?

As well as being prepared with things and keys there’s calculating what time to leave in order to get there on time. It’s just a ten minute drive but at rush hour it could be a bit longer. Incidentally rush hour in Edmonton is like normal traffic anywhere else. And on this short commute I’ve even contemplated joining the rest of Canada queuing for coffee and Timbits at Tim Hortons. But so far I’ve settled for tea and instant oatmeal for breakfast, after morning meditation.

Timbits are to Canada what Big Mac’s are to the rest of the world. Tim Hortons is the nation’s favorite ‘pit-stop’ chain, founded and named after the famous hockey player, and should not go without mention while I’m still in this wonderful country.

So this morning at 6.30 am as I sailed north up 109 Street, accompanied by the Gold and Silver Waltz, I had an appreciation of what it’s like to commute. Back in the early 1970’s I drove one to two hours up the A3 to London in a venerable VW bug. There was heat which reached to my right foot only, no radio, very little synchromesh, and suspect breaks. And I loved that bug to pieces. Ah, happy days.

It was during those long commutes, nose to tail at high speed through the Surrey countryside, that I learnt something of sitting still. Much latter while parked for two hours, or more, on the M25 London orbital, I passed through the impatience barrier to a deeper acceptance.

Sometimes one learns to sit still because there is no viable alternative at the time! Waiting in traffic has never been the same since that M25 incident. Uh! Maybe I’ll stop for some Timbits tomorrow morning.

Canada reached a record breaking high temperature to-day. Somewhere has to be the hottest place, and that was Lytton BC, at 40c. Let’s hope it cools off by the time we get there on Friday.

It’s been a warm day in Edmonton too.

Our landlord, Bob, phone half an hour before we were due to meet him for the final inspection of the property we vacated yesterday.

The accumulated strife and frustration which often arise when dealing with a landlord had become focused on this last encounter with him. Without fully knowing it I, and the member who had dealt with Bob in the past, were keyed up for an ‘encounter’. After all most of our meetings were less than easy-going ones. We were conditioned to anticipate trouble. However the place was clean, the holes in the walls were filled, and no damage had been done. And, AND a huge amount of working meditation had gone into dry walling the basement to make it into our meeting room. We had left the place better than we had found it.

Still, the final ‘walk through’ loomed. “Would we get our $900 damage deposit back”? “Would we have to make a case”? Bob on the phone, “Hi. No need to do the walk-through”, “Everything is immaculate”. “You can pick up the damage deposit cheque tomorrow”.

For all the frustrating phone calls about the heating system malfunctioning, the calls pleading for permission to put up light fixture, for all of the receipts still unpaid, I put my hands together and say, THANKS. Thanks for showing me, once again the assumed adversarial relationship with landlords, workmen, and officials of every kind. Thanks because where else is one going to learn to go deeper than fear, frustration, defensiveness and fury than in the hands of individuals one feels powerless to counter.

Tomorrow I will be dealing with the power company and the phone company. Actually, I’ll be dealing with individuals doing the best they can to do their job to provide a service, to customers who are often unhappy even before they arrive at their door.