I’m so delighted to point you to the work of a Dutch artist, a practicing member of the OBC community in The Netherlands, who has created a wonderful contemplative space in a nursing home in Delfshaven. The site has just recently been translated into both English and German and is, in turn, the work of another Dutch woman artist in our congregation. What talent! I’ve known them both for many years, I can’t say enough good things about them. And here is a link to the home page of the site I’m referring to. Great poem from Basho on there

‘There is little place for reflection in our society, so what I had in mind was to literally and figuratively make room for quiet contemplation here, in the middle of a busy nursing home in multicultural Delfshaven Rotterdam.’ Meulendijks decided not to place a work of art in the space, but to make the space itself into a work of art. The goal was to create a place that excludes no one due to religious affiliation or physical challenges. First, she constructed a detailed model to adapt the existing space to these purposes. She altered the structure and layout and employed motifs from religious architecture to create a visually subdued, serene experience for visitors. Her choice to use circle and dome patterns, as universal spiritual symbols, places the emphasis not on our differences but on the shared human experience of an inner life. All the same, Meulendijks designed mobile furniture and liturgical objects to allow different religious groups to temporarily tailor the chapel to their specific needs. In addition to traditional craftsmanship and handwork, the artist and her team also made use of anachronistic details in the chapel – not in an attempt to resurrect the past, but rather to make all sense of time disappear.

The result is a public space that gives visitors the seclusion they need to listen to the silence.

From The Zorg Compas Chapel, Rotterdam.

See more of Ingeborg’s work and schedule of exhibitions on her web site.

Yesterday morning my sister, Judy, and her youngest son and his wife left for Oklahoma from California in a sort of reverse migration of events in American history. Many of the reasons were the same: untenable living conditions and keeping (most of) the family together. Compared to the bloated and collapsing California economy, Oklahoma has reasonable housing prices and more available work. And of course there’s my sister’s oldest son, wife, and two year old child already there; the growing edge of a thinned out family tree. A small part of a new American history, a large part of a new family story.

Well, new and old actually. My father emigrated from Denmark in the wake of the crumbling European aristocracy in the 1920’s, my Iowa-farm-girl mother fled alcoholism and domestic violence for the big city of Chicago. Eventually they left Illinois for work and a healthier climate and worked their way to California in their two-toned 1951 Chevy, my sister and I in the back seat munching cookies. Route 66.

The last days of preparing to leave were, of course, chaotic. It’s impossible to pull up roots without loosening the very soil around you. And there are no close passive observers in family moves, my roots were being yanked even though I wasn’t moving. We drew closer and more honest about our feelings. And more honest about what life looks like through the cracks of altered ordinariness. Every interaction became a reminder that it was one of the last before the big change. If excited, we reveled in the betweeness; if tired, we retreated to observations of how “it could be worse”. Family stories of births and deaths circulated amongst the constant revision of plans.

The big day came. Nancy’s and my house became the staging ground for the departure and I cooked a big breakfast. At times giddy, at times stuck in a middle distance gaze, we were reminded that much of what is good in life is unbelievable.

After they left I started cleaning the house but it was as if I had one foot nailed to the floor. I went from task to task without completing anything. Objects defied me and hid themselves from my use or just broke at my approach. When the computer froze and wouldn’t allow me to send an email to the nephew in Oklahoma, I bolted in frustration and went out on the front porch for some fresh air. I found there a hummingbird trapping itself against the glass ceiling of a skylight, frantically beating itself against the unseen. Her situation spoke to me directly.

I slowed down the internal rush of anxiety, exhaustion, and excitement and fetched the ladder. Step by small step, I put the ladder in place and carefully climbed to the hummingbird, gently caught it, and stepped down the ladder. Each step was an act complete in itself, each feeling of completeness releasing an individual emotion. This step: sadness; this step: joy; this step: fear; this step: release. As I cleaned off the cobwebs on her wings, the hummingbird cleaned off mine. We were both spent. Opening my hand, she rested briefly and flew off.

She said it was a Quiet Night, so I’m quiet. 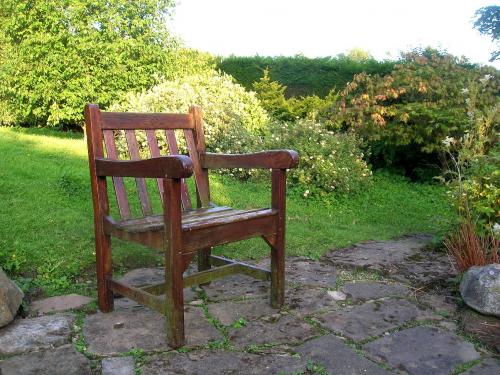 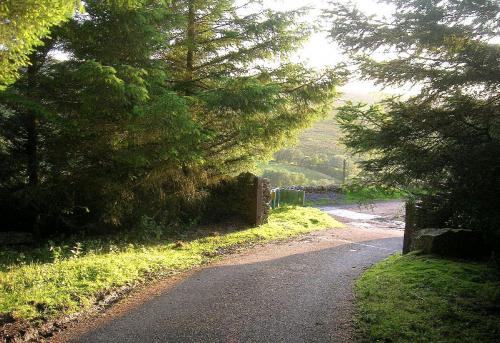 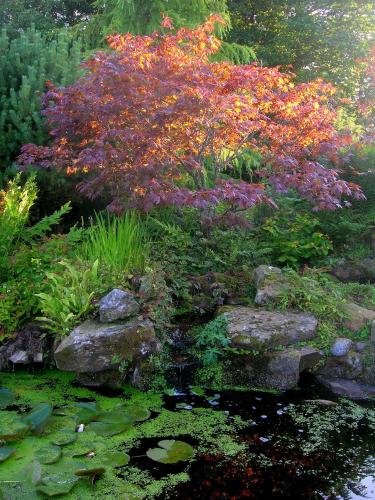 Everything quiet – still. And still the sound of water. 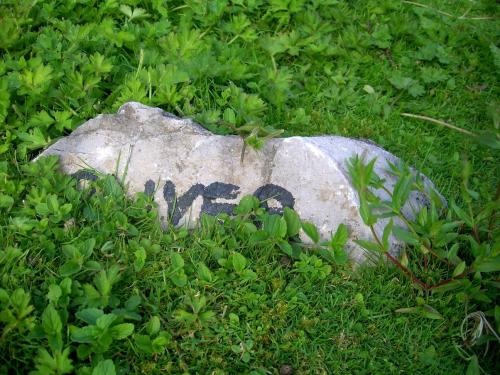 Remembered. In silence – in a grave. 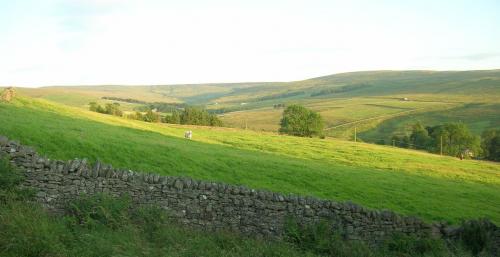 …the evening draws on.

I have a tendency, I guess we all have, to close down any thoughts and feelings about something that happens into one, usually quite judgmental, opinion.

So, the comment: I can imagine the way you live must be very relaxing, not worrying about anyone else, had led to some pretty negative judgments of my own suitability to be telling people about what Buddhism means in practice.

This process can be justified to ourselves as a focusing on what is really going on – when it actually feels a lot like a closing down of seeing things. If in response to this I can reverse the process and instead open up the associated insights and realisations that come when we just look and ask – then what do I find?

Well, I yes wonder if I gave a misleading impression on the extent to which, as Buddhists, we care about others;

and: this was the only comment out of a large bundle that I was picking up on, and conceivably the only one with which I could find a way of criticising myself;

and: I remembered a question during the class which went something like ‘isn’t it unfriendly to sit and face a wall with your backs to the the people who you are meditating with” – what a good question! and my answer was something about how we have to work on our own stuff and not worry about what other people are doing AND that somehow this helps us all and doesn’t feel like we are cutting them off;

and: maybe that was what she meant and maybe there is a sense in which we don’t have to worry about other people even when we are helping them;

and: I remember being 12 and worrying a lot about what other people thought and felt, and isn’t that sad; and in fact isn’t it sad that I still worry a lot about what people think; and wouldn’t it be a relief not to carry this burden of worry and related fear.

And I find myself with this collection of perspectives and insights all laid out in front of me, and somehow the original concern seems to dissolve.

I used to think of this opening up process as a bit like following a thread that would lead somewhere, and often it did lead to thoughts and feelings long buried and not acknowledged. And thinking of it like that seems now to be too closed mind again – looking too much for some single underlying cause. So now I think of it much more like pulling a thread and the whole jumper just unraveling.

I have had a lifelong fear of being misunderstood. Perhaps then it was no accident that the large part of my professional life was spent studying and trying to overcome the ways in which misunderstanding arises between people, within organisations and across social groups. Unfortunately one of the consequences of this was that things I wrote were so meticulously precise that, while there was little room left for misunderstanding, this was mainly because no one could comprehend any of it in the first place. Perhaps this is why I ended up working with lawyers.

Over the last ten years I have relaxed a lot and started to accept misunderstanding as an inevitable consequence of communication. And partly to appreciate that we often can’t hold ourselves responsible for how people interpret what we say. Anyway, contributing to this site has re-awakened much of my previous fear – the potential for being misunderstood in this context could be quite vertigo inducing.

So I wanted to share with you one of the letters I recently received. I have been giving a class in Buddhism to some 12 year olds at local schools – they have been studying Buddhism and their teachers thought it would be good for the students to see a real life Buddhist and have chance to ask questions. So far I have given my talk to, and answered hoards of questions from, about 160 very lively students. Some time after one of the classes I received a large bundle of enthusiastic letters from the students expressing their thanks and describing what they liked about the sessions – it was truly heartwarming to receive. Amongst them – and in an enthusiastic, warm and supportive letter – one of the students had written:

I can imagine the way you live must be very relaxing, not worrying about anyone else.

Well heck, I thought, what on earth did I say that made them think I didn’t’t worry about anyone else? Had I given the impression that Buddhism didn’t care about others? – and should I give up trying to explain Buddhism altogether if I could be so misleading? It almost seemed on a par with the memorable line from the film A Fish Called Wanda: when Wanda tries to explain to Otto that The central message of Buddhism is not every man for himself.

Anyway, I told myself to forget about it and just get on with the next thing. But it has been niggling at me like these things often do when they have more to show. So I thought, with your (Mugo’s) voice echoing in my head, lets sit with this fear, lets look at it a bit closer, open it up and let the air in at it – let the rain fall on it a bit.

And that is what I’m doing – I’ll let you know how it goes.