Now I wonder how I ever managed, now that both computers are upstairs in the same room. No more all-day-long migrations from upstairs to downstairs and back again. Toggling between computers. Sometimes I’d think, “This is crazy”, and “I’ve got to do something about this”. Trouble was I knew it involved a huge upheaval. Moving a computer can be a nightmare of cables and connectors, and who knows if everything will work after it’s been pulled apart. And there are the spare desks that need to find new homes. Worse, during a move, there is all that untamed office ‘stuff’, paper clips, staplers, elastic bands, labels (so many kinds of label) spilling over every available surface.

Today conditions ripened for a move culminating this evening with two desks being taken away in a U-Haul truck on route to become part of a young couples first new home together. Everything is working OK and the unruly paper clips are trapped behind a curtain for the moment. They and the rest of the rabble can have their freedom for now.

We would have upheaval days in the monastery, sometimes they lasted several days. Offices would be moved, people would move, furniture would move and garden carts full of stuff would be moved. During one such day I remember walking the cloister with a fellow monk who was a bit put out. Somewhat insensitively I chatted on enthusiastically about how good I thought it was because moving stuff brought the truth of impermanence before us. True, however my timing was poor.

Well anyway. Over the years I’ve grown to enjoy sorting and shifting, de-cluttering and taming stuff and then vacuuming up afterwards. All the same, there remains the tendency to put off making moves.

This posting is dedicated to those who are poised on the brink of a move. “Come on in the water’s fine”.
Oh, and good fortune to the couple starting there new life to-day.

Sifting through papers this afternoon I came upon this piece sent to me by a dear friend in Southern California. I think she included it in a care package, December before last.

A Time to Talk
When a friend calls to me from the road
And slows his horse to a meaning walk,
I don’t stand still and look around
On all the hills I haven’t hoed,
And shout from where I am, “What is it?”
No, not as there is a time to talk.
I thrust my hoe in the mellow ground,
Blade-end up and five feet tall,
And plod: I go up to the stone wall
For a friendly visit.
Robert Frost

I’ve been contemplating those times when a word or a gift or just a gesture reaches through the thin veil of the constructed self to a deeper level. Times when one’s heart dances and one’s feet skip forwards into life with renewed confidence. Here are just a few such encounters that have surfaced into memory as I prepare a talk for Wesak on the theme of Giving and Receiving.

An early memory of a special gift was watching my Aunt Paddy spitting in her mascara and then applying the black goo to her eyelashes. It was the 1950’s. She brought glamour and a wider world into my country girl’s life. Later when I’d reached my teens she encouraged me to write, telling me I had a knack for descriptive writing.

In Singapore 1969, standing at a lightbox in Kodak’s main processing plant. I was viewing slides taken during my overland trip from England. An Australian photographer gazes over my shoulder and we strike up a conversation. Parting he said, “Look me up in Sydney, there may be a job for you”. And there was. (In that simple exchange I got what I wanted, recognition as a photographer, and then I could move on).

Twelve years later, now as a novice monk. I’m walking on the cloister at Shasta Abbey. Miserable! Female senior passes and silently slipped me a few squares of English Bournville chocolate from her robe pocket. Instantly I’m lifted, not so much from the chocolate but from the message it carried. Years later and I’m with the same monk. She is suffering. I say out of nowhere, “You know, if there wasn’t ‘letting go’, life would be hell wouldn’t it”! I just remember her laughing heartily in response.

I am sitting listening to one of our lay ministers giving meditation instruction to a room full of people. He is inspiring. The teaching is direct clear and kind. I’m moved to tears. Hearing this one person speak so eloquently brought home to me the jewel that is the lay sangha. A realization of what they have to offer, and what they offer me.

So, back to getting my thoughts organized for that talk.

Does anybody know what this statue is? I thought it was one of the Japanese Noh Theatre characters, Hannya however I don’t see horns growing out of her forehead as is traditional for this character. The statue is a simple carved wood one measuring about 4 inches in height. The hair which shades her eyes falls down the back ending in a point. There is a mixture of fine detail and simple single stroke cuts after the style of Enko. (Enko was a 17th century Zen Buddhist monk who carved with a hatchet and left behind an incredible legacy of carved Buddhas.) 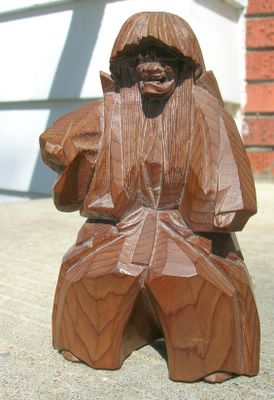 Here is an item from an email sent out to priory members to-day.

Plastic Bags: As those of you who have dogs know only too well, plastic bags are an essential element in dog walking. Since bags are not in infinite supply could you please help by bringing your, clean and dry, bags to the priory for dog owners to use when cleaning up after their animals. I know the bags will be appreciated. 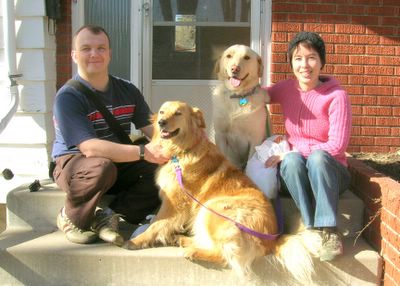 Now and then all things come together, the sun’s shining, everybody is looking at the camera, everybody is smiling and BINGO a great picture. This was captured on the priory steps late this afternoon. And, I had some plastic bags to give away too.