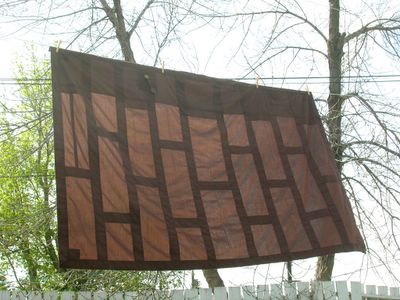 A kesa drying on the line behind Edmonton Priory.

I don’t find it easy to write about the Kesa because of the need to talk on several levels all at the same time. So I’ll not try right at this moment as I’m off to make one, and that’s a good few hours work ahead.

When Rev. Master Jiyu gave the first, five striped, brown kesa to a lay woman at Shasta Abbey it fell on me to show the recipient how to put it on and wear it, as well as take it off again. At a certain point she got a tad flustered about the whole thing. Out rolled from who knows where, “Well, what you are doing each time you put on the kesa is wrapping yourself in the Life of the Buddha’s and Ancestors”, “So you are wrapped in the Precepts, right”?

Housekeeping.
I’ve been a bit tardy around responding to comments these past days or is it weeks. However today I went back and left some. The dial-up speed here is 31.2 kbps and so I use what time I have in the day for making new postings rather than responding to comments. It is always good to see what you have to say though and will endeavour to respond when I can.

Now, off to the sewing room.

Each autumn I do some heart searching in connection with being vaccinated against flu. To have or not to have? And not having much information to go on, for or against, and not being keen on injections anyway, I opt out. But is that irresponsible? Is my not having the injection putting others at risk?

The other day I heard that the local doctor was coming out into our wild valley with a bag full of vaccine. Apparently he comes because there are enough of the community who gets vacinated to make a Herd immunity (community)! And presumably worth while for the doctor to make the journey. A heard immunity, by the way, occurs when the vaccination of the majority of the population (or herd) provides protection to un-vaccinated individuals. So I’m grateful for all those who make it possible for the rest of us to remain un-vaccinated, yet protected.

The other subject that has been before me recently is, now taking a deep breath, Psychoneuroimmunology. In a nut shell, this long word encapsulates the truth that mind and body are not separate. A truth that Buddhism teaches and proves true, in fact the discipline of Psychoneuro…….ology indicates that meditation really helps the immune system.

And for people facing cancer the above discipline means that meditation and similar activities can effect recovery, significantly. However, a big however, in Zen, meditation is complete in itself and not something one does to achieve or get anything, or get rid of anything.

Time to spare a thought for all those who are living with seriously compromised immune systems.

I’m really pleased to have this quote from The Water Babies which a fellow monk reminded me about during a phone call this evening. Thanks Reverend, it’s a good one to remember on basic practice, for any of us. Meister Eckhart has something to say on spiritual adulthood, if only I could find the quote….

And then there is this hearty refrain from way back when The Mamas and The Papas where singin’. Was that from the 1960’s when many of us where not going to grow up, while thinking that we were!

It’s that time of year on the moors when Autumn turns into Winter, over night. At the moment the wind is such that during the night it blew over a bench on an exposed lawn, making it, according to one of the monks, a Bench Force Wind. Apparently there is a Bench Force 3 wind when all three benches blow over!

Wind, like rain, has many subtle variations with suitable descriptive terms used on our weather reporting system in and around England. One being the Shipping forecast, which many a night I would listen to in Cornwall as the walls of my caravan breathed in and out alarmingly. Thankfully the walls of the buildings around here are feet thick and made of stone. The roof tiles on some of the older buildings are the size of paving stones, almost.

Anyway the wind I like most, or rather it’s description, is ‘impedes progress’. And, until one has had ones progress impeded by wind it is difficult to appreciate what this means. Watch out for flying children and small animals I’d say!

CPRE, The Campaign for the Protection of Rural England announced in a recent news release that Northumberland, this county, followed by it’s neighbour Cumbra have been found to be the most tranquil places in England. There were some obvious criteria for the tranquility assessment; bird song, the sound of running water, the absence of traffic noise, rural views, number of people around.

While all the conducive conditions exist here for meditation and reflection they are not essential. In fact any one can sit still, anywhere, any time. It’s a choice, which becomes easier to make with frequent practice. Let the winds blow!

I came across a blog written by a platoon leader in Mosul, Iraq. He’s 23 years old. The following is from a recent post where he talks to his fellow countrymen, imploring them and all of us to consider our thoughts before speaking. He writes thus:

The moral of my men has a direct impact on whether they will live or die each day. I choose to live and so does everyone here. Despite this desire, demoralizing conditions do great harm, in regards to keeping my men safe. These conditions lead to complacency, which will, at one point, lead to another tragic event that I don’t want repeated. In summary, I implore you, as a collective group, to consider your thoughts before you speak and understand that your comments have a lasting effect on real people that fight this war on a daily basis.

This certainly has given me cause to pause before speaking my thoughts. That’s my thoughts about anything. And to reflect on compassion too, about there being no place, person, situation, country etc. that compassion cannot reach…if one opens to that possibility.