Well, what do you make of this! Stunning to think that we too can erect walls which have no substance, within which it is so easy to remain. Even with the lure of squeaky toys to entice us! 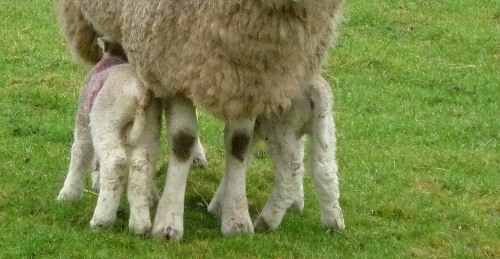 It’s lambing time
The first sight of lambs is always a joy. A little pang of excitement too, rises up. Spring is surely on it’s way.

Can you explain the Twelve Links Of Dependent Origination? Nobody ever asked me that question in a class. Thankfully. But I do remember hearing about one of the seniors putting a new teacher he was mentoring on the spot. He announced to the gathered congregation that the young Reverend was now going to explain this bit of Buddhist doctrine! Off the cuff and without notes.

There is much written on the subject which you can go and look up if you want to understand in detail how one-thing-leads-to-another in the never ending cycle of birth and death. That’s the big stage this doctrine plays out on. And there is the stopping in a particular instance, of grasping for example, where the flow of cause and effect stops. For an instant. Thus opening up a space to decide to do something differently, or not at all. I seem to remember it was around link eight and nine, craving and clinging (attachment), where a link in the chain could be weakened. I’ve a happy memory of coming to the small realization that attachments were not the problem. Sticky fingers, grabby hands and the like were the problem, the relationship to attachments was what to watch out for. Ah, happy insights. Only to then fall to the ground, and be forgotten, for others to rise up.

The basics of practice do not change however I’d say now that ones relationship with ones interior becomes less self centered as the years go by. By that I mean the self conscious practice of earlier years gives way to a more reflexive response to existence. Sounds good ay? Well, nobody rests in there ever lasting place of understand. We say that there are always grand opportunities to be disturbed by the truth. In this case the teaching of The Twelve Links of Dependent Origination as they enact in ones day.

Here is a daily life example of how the understanding and appreciation of Buddhist teaching deepens, quite naturally. Books are fine, plants on a windowsill are fine too.

…the remarkable bit is the link between contact and desire, I never even thought about it until I saw it, but there is a complete and powerful link of dependency between the two that you don’t even know is there until you spot it and the ‘penny drops’. From a blog post titled Desire by Iain of Little House In The Paddy.

Matthieu Ricard on the habits of happiness. What a wonderful talk, full of charm and profundity. Also a huge number of comments worth reading are tumbling down the page after the video window.

It whirred, it buzzed, it whined and rumbled. It sent the trees all a quiver, grass flew up wildly as it got closer to land. Hovering, rising, falling and rising again. A man lent out of a side door, much as a passenger would in a car, guiding the driver safely into the parking space. People appeared in areas I’d not seen them in before. Peeping through hedges, running up the back alley, loitering by walls and generally engaged in watching. Who wouldn’t watch, whose attention could not have been attracted when a helicopter lands. What authority this machine has, coming out of the blue.

The other day out of the blue, almost simultaneously, came news of an old friend close to death and cold symptoms, inextricably taking hold. The buzzing and whirring was painfully confined in my head and limbs! Amazing how something like a cold can descend so fast and so completely. News of the dying woman I have known since my teens seeped in, slowly. Not able to see her I sent a text with my love, to her son to pass on. Thankfully it reached her just before she died. Apparently she laughed…. I think that was a good sign!

A death, the death of an elder, a 91 year old elder suffering multiple strokes, doesn’t attract that much attention. The long life slips away. People close remember with great fondness and we know it was, the death was – for the best. Back in the late ’80s I was in the family car following the hearse transporting her newly dead husband. Afterwards, after the cremation, she said You could do a better job than that. He didn’t know ‘dad’ at all! You do my funeral. I will do my best when the time comes.

So I am left wondering the fate of the elderly man who was rescued the other day, trapped as he was underneath his Land Rover. The Air Ambulance helicopter eventually flew off Eastwards in the gathering gloom. They said he was taken to Middlesbrough Hospital. People stood in the street as the ‘copter’ rose up past the trees and into the air, a sad and shocked feel ran through the street. The police, at least four cars, and an ambulance were still at the scene as I walked back from the shops. Police tape cordoned off the scene, blocking off the road. OK to get home this way, I asked the imposing policeman? Sure love, just keep over to the left would you.

Then, out of the blue, a reader sent me this photograph of the Heron snapped this morning in her pond. Perfect! I thought, A Blue Heron to go with my out-of-the-blue-post. But no. News of a Blue Heron in the south of England would have bird fanciers flocking to catch a glimpse. This one is a Gray Heron – with a dodgy leg.

News out of the blue can come as a shock. The news can seep in slowly or take one by storm. It can be for the best or numbingly unacceptable. Can attract attention or pass into ones bones unnoticed. Unknowingly we probably carry a lot of out-of-the-blue news, in our bones.