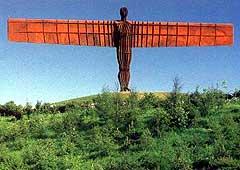 Just before Newcastle stands the ‘Angel of the North’. She stands with wings out stretched, towering above the A1. It is the major road running up the east side of the country from London and onwards into Scotland. Yesterday I noticed as I passed the angel, while on a shopping trip, that she had turned a deep rusty red.

I was out looking for an office chair with one of the monks. In Staples I found one that worked for me, not that I was looking for one myself. A man there was doing the usual game of ‘musical chairs’, moving from one seat to the next, pausing briefly to test the chair then move on. Not an easy matter to quickly judge the suitability of something that will probably be ones companion for years to come. I approached him saying, “I’ve found one that’s good” he replied that he liked the image factor of sitting in a black leather chair, perhaps more important looking, more powerful feel, whatever. He tried the chair I’d pointed out and instantly took to it. “Just right” he said, “Good lumbar support, just what I need”. I gaily said something like “Oh well, one just has to drop the image sometimes!” and we parted with smiles. Latter we met at the check out where he was paying for the chair. To make conversation he said, “I’m the kind of person who doesn’t shop around, if I find something that works I go for it”. This caused me to ponder about my own habits. By and large I am like him, if I find something that works, I’m content to buy it and not look further…and then Halescombe House came to mind, AGAIN!

As I mentioned earlier I stayed at Halescombe in July,. I know the people there and it is located close to where my parents lived at the edge of Exmore, one of England’s national parks. The whole area is very familiar since I would visit my parents there. After my fathers death I spent a couple of months packing up and then selling the house. That was when I first met Emmy and Joop, they were looking at houses for a sister. They describe themselves as guardians of Halescombe. It is a large Victorian house situated above Porlock famous for it’s very very steep hill. Halsecombe is at the top of it and commands a wide view across the river Seven estuaries to the Welsh mountains. At night the lights of Swansea and Cardiff blink in a necklace of light around the coast of Wales. For some years the house has operated as an interfaith retreat center and nowhere could be more suitable or conducive for peaceful reflection. My few brief stays before this one has left me ‘renewed’. This time was no exception, however the house has come with me in a way I’d like to just get off my chest.

To cut a long and somewhat complicated story short the house is for sale, for 1.3 million pounds. For us however (in practice that means me) it is nine hundred thousand pounds, plus furniture and fittings. I am like the man at Staples, although I am not shopping for a house of course! I sat there at Halsecombe this July; it seems good and, having let go of the thought of myself as a traveling monk, could see it as a good place to be. I hesitate to say ‘buy’ as thinking in those terms does not meet with what Joop and Emmy are actually doing. After 25 years of unremitting work to restore the house from a ruin to the immaculate condition it is in now, and then several years running it, they have come to the point in their lives, as Emmy puts it, “to let go completely”. So they are handing it, sold or unsold, to their religious organization the Interfaith Seminary, in short they are giving it away! They are handing it on in faith, their hope and wish is that it continues as a religious retreat of some kind.

Perhaps it is not Halsecombe itself that revisits my thoughts. No, I think it is this open handed offering of these two people, Joop and Emmy who have poured out their life energy in this place and who are able to then simply let it go. I find the whole thing breath taking. I would love to meet their open hands and sadly I know it is not practically possible. (Although I may buy some Premium Bonds from the Post Office next time I am in just in case my number comes up for the ‘big one’, one million pounds.) Their passing on of Halsecombe is what, in Buddhism, we call dana. That’s giving with no thought of anything in return, giving from the heart in faith. And there is an angel connection too, not that I believe in them of course (shame on me!) Emmy practices Reflexologist and while giving me a treatment some years back I looked up and thought, “Oh, that’s what angels look like”. Was it the long blond hair or the gentle, kind and energetic presence? So there you have it, an angel of the north and an angel of the south!

Footnote 1: Kay, a congregation member from Newcastle, I believe, sold the steel that is now glowing red with rust beside the Al welcoming travelers to the great North of England.

3 thoughts on “Angel of the North.”