This afternoon I took up Iain’s ticket on a most improbably double-decker bus tour to Stainmore Summit and Belah Viaduct at the head of the Eden Valley. As the can-do driver said, often, this is probably the first double-decker to come up this road. That road was actually a single track lane winding it’s way up the valley between unfenced fields with cows and sheep gawping at the spectacle as we lumbered upwards. In true British fashion, when in adversity, the passengers became jolly, bright and participatory. Cheering the driver on through narrow gaps and rounds of applause too for other major achievements along the way. We were on this trip to view the now defunct Belah Viaduct, a major jewel in the Stainmore line linking Barnard Castle and Tebay. A most ambitious project in its’ day. 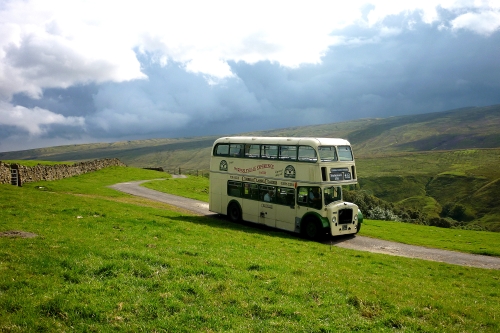 Earlier in the day we scattered a portion of Iain’s ashes on Tailbrigg hill. This was the same spot he had scattered his grandfathers ashes many years earlier. We got a fine dusting of our friend in the swirling wind!

Into the air Iain. You would have loved to-days trip. I was quite scared in places yet glad to be there in your stead. The new Stainmore Summit sign another grand achievement. It replaces the old one taken down after the line was closed in 1962. 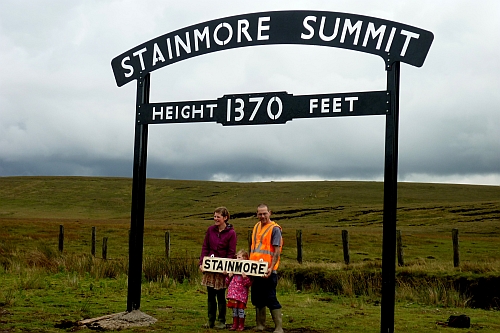 Iain’s grandfather was a signalman on the summit.

The other day I was making light fun about the seeming obsession of these railway enthusiasts restoring the station and line. Mike the chairman of the railway company opened his eyes wide and said with good humour, It is your heritage my dear! Duly chastened, I now have a renewed appreciation of what the age of steam brought forth.

4 thoughts on “To Boldly Go”