It is the day that Buddhist around the world remember the Buddha’s Parinirvana, sometimes referred to as the Buddha’s Full and Final Enlightenment. During Morning Service we remembered the Buddha’s death by reciting the offertory traditionally used at the end of the full ceremony which is performed in our larger temples. See also to-days BBC News item. 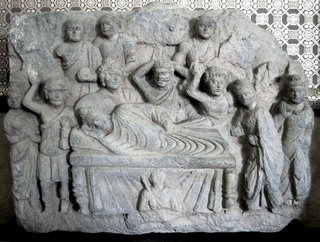 The Buddha’s Parinirvana.
A carving from Gandhara, 2-3rd century.
Image recently released into the public domain.

I seem to be a bit wistful this evening, perhaps it’s contemplating death that’s done it. When in the presence of somebody who has recently died, when the body has ceased to have physical life, there remains a sense of vibrant ‘life’ that is unmistakable. At once there is both sadness and a great sense of celebration. In images of the Buddha’s Parinirvana my Master would point out the person who is depicted crying. Reminding us that we have feelings and it is OK to be seen to grieve. If I remember rightly, along with the grieving disciple she would point out the sleeping cat! Anybody remember Rev. Master talking about the cat?

Go here if you want to read a translation of the Mahaparinivana Sutra, The Great Discourse on the Total Unbinding by Thanissaro Bhikkhu.