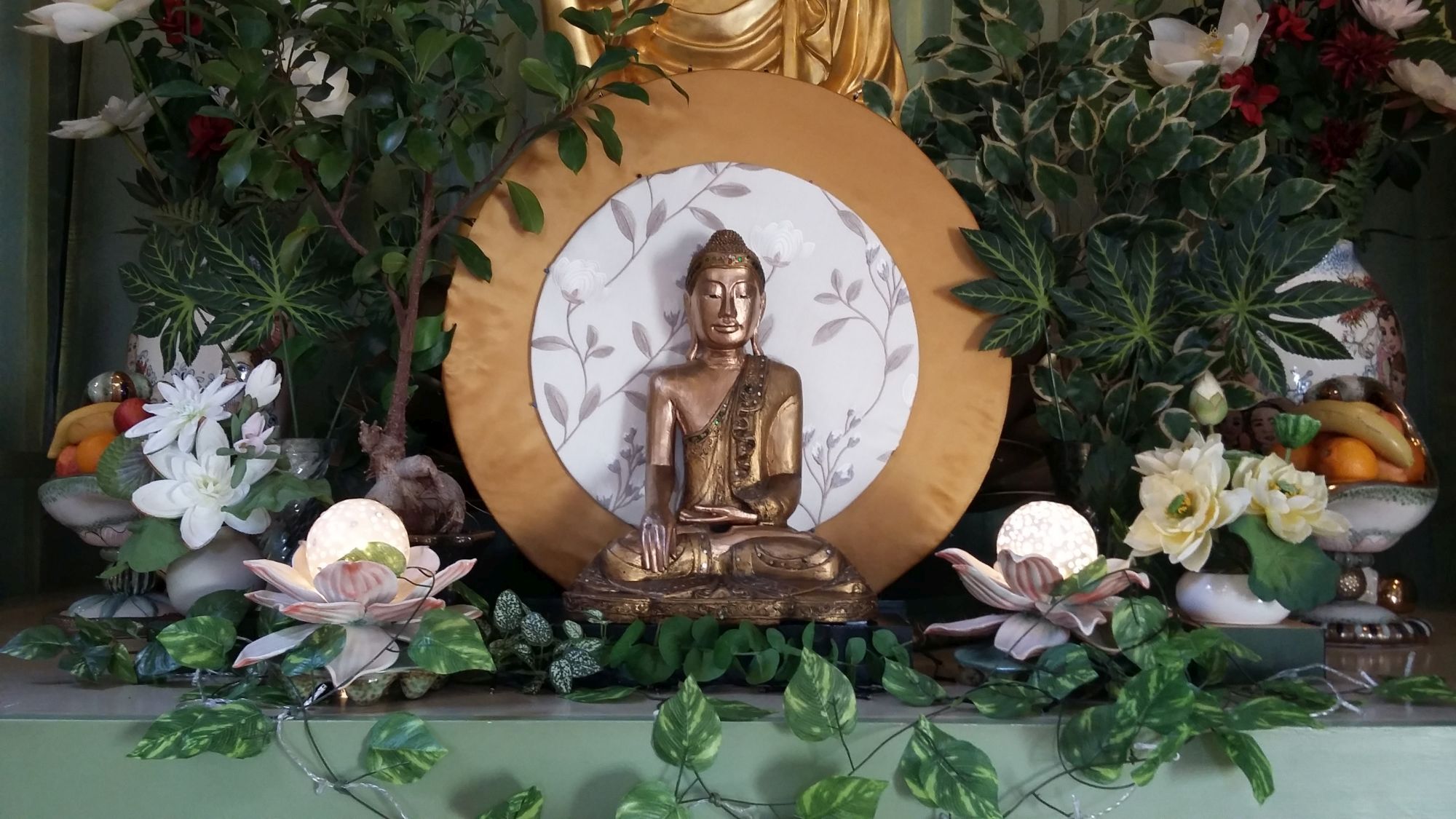 Traditionally, the 8th December is regarded as the date we celebrate the Buddha’s Enlightenment, but let’s not get tight about that, shall we. This is the altar set up for the ceremony in 2018. Nice. With the tips of the Buddhas fingers touching the earth, in so doing asking the earth to witness his resolve. There we go again, the significance of bearing witness.

In certain circumstances, one asks (in one’s mind) for the ‘great earth’ to bear witness. Could be anything, however commonly an element of resolve in the spiritual sphere (less common, for example, a resolve not to eat sugar ever again, but..too much sugar can be life limiting for some, so…. )! You can’t get wider or broader than the great earth as that term (in Buddhism) refers to everything, everywhere..

The Buddha’s resolved not to rise from his place under the Bodhi Tree until he realized Enlightenment. The gist being, he was determined; clear in purpose, firm in intention. Who knows if that was the night, or early morning as it happened, he was enlightened on seeing the morning star. The point is he was firm and clear about what he was doing, sitting still in an ascetic manner not having eaten, much. However.

One can be firm in purpose and intent which can (and should) be given expression in a soft, compassionate and kind way. Traditionally it is said the Buddha was given a bowl of milk porridge to break his fast (now we would say he was ‘being kind to himself’, compassionate but I’d say he was exercising wisdom) by accepting the offering. So in life, as with the Buddha, there is firm in purpose, and soft, kind and wise in implementation.

Back to ‘not eat sugar ever again‘? One might think that is simply a health issue, which it is from a certain perspective. Fundamental to our practice is ceasing, refraining or inhibiting – from habit driven (could be simple avoidance) actions. That is the first of the Three Pure Precepts. There is not a never again in there, just deliberately deciding to not do something one wants to, or could, do. That decision is more powerful than one might imagine, in terms of long term practice.

Isn’t that what we do when we sit down to ‘sit’? That’s to put aside other options, including the fear of sitting and the sometimes almost *intolerable feelings and sensations that arise. Isn’t that what the Buddha did, he could have been down at the river having a wash but no, he decided to just sit.

*here acknowledging that for some it is wisest, very strongly advised, to do ones ‘sitting’ while walking or something else physical and undemanding mentally or emotionally.  That too is an expression of clear intention and soft and kindness in implementation.

Remembering my dear mother, who died this day, 1994. Later, I’ll pilgrimage down to where she is buried beside my dad in the cemetery here.