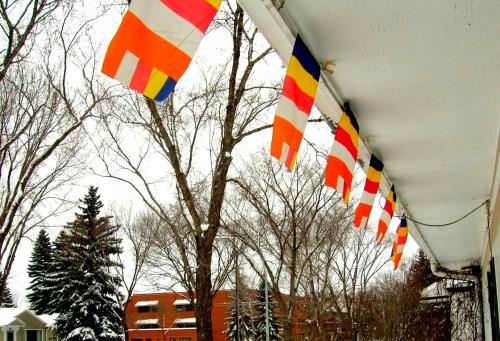 These Buddhist flags were strung along the front of the house where the Edmonton Buddhist Priory had its’ home back in 2004-2006. I took this picture in the winter with, as you can see, snow on the ground. Ah, those cold crisp and bright days. Sometimes the wind would get up and the flags would billow and flutter pleasingly.

Flags are so welcoming. We don’t see this particular style so often out for the public to see and most people don’t know they are Buddhist flags. Everybody on the other hand knows what Tibetan pray flags are like. Of recent times temples have been making their own bespoke flags with symbols such as a wheel or a lotus stenciled on them. Colourful and jolly and most often used at the time of the Buddha’s Birth (Wesak) in early May.

In Edmonton these flags were permanently attached. So much so I remember struggling to get them down when the Priory moved to an apartment in June of 2006. One chap, who became a regular attender at the Priory, told of how he was out walking one day and saw the flags. Knowing them to be Buddhist ones he knocked on the door and was amazed and glad to find a place to meditate which was just around the corner from where he lived.

For those who know their meaning these flags are great advertising. They got at least one person out of the cold and onto a chair to meditate.

This post is in gratitude to the couple of friends in East Asia who have send a parcel of these flags as a gift. I believe they will come in handy some time in the future.