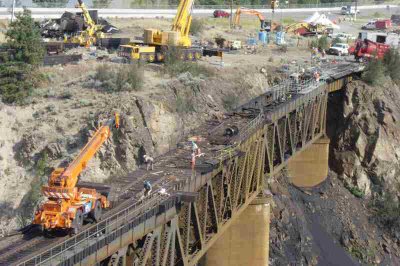 There was a serious derailment on the bridge over the Thompson River at Lytton over a week ago. Coal was dumped into the river. Seems it will take two to three months to mend the bridge. So hearing the train whistle echoing up Botanie Valley yesterday morning was a reminder that the trains are now moving through the mountains again, to and from the Prairies and beyond. Lytton is thriving with all the extra business brought in with the bridge workers. It’s said that the local motel is having people sleep in eight hour shifts. Sheets changed every eight hours?

And as if that was not enough, on Friday a second derailment with grain being dumped into the Fraser River this time.

One can become derailed, but not for long. That would defy one of the three signs of existence. Impermanence. Maybe falling off the tracks is not as big a disaster as we imagine. After all, life does carry on without our moving hand and that is good to be reminded of, now and then.

Thanks to Victor for the photograph. Good job.