Here is a banner made by members of Pine Mountain Buddhist Temple. It was part of an offering, a massive circulation of merit, made in Japan last August. A corner of the banner was reproduced as a card and mailed to temples and friends of our Order. We received one here in Edmonton and I was inspired. It is a beautiful image and an amazing project which works on so many levels. I wanted the whole banner to have a wider audience. So here it is. The merit of altruistic effort, such as the Jizo for Peace Project, just keeps on multiplying. 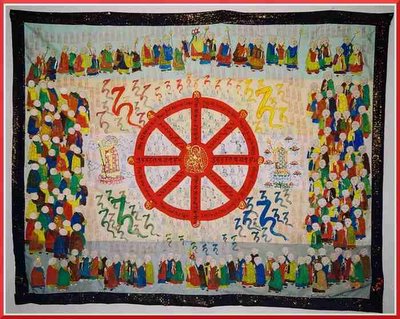 Reverend Jan Chozen Bays, of Great Vow Monastery, was the moving hand behind the Jizo for Peace Project. Nine bows. Her contribution was a banner dedicated in memory of her mother.

Shasta Abbey contributed too, you can view many of the banners and other creative offerings as a slide show.