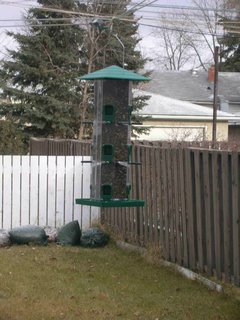 This morning I was gazing out of the kitchen window at the new bird feeder I bought last Monday and notice, not for the first time, that there were no birds on it. Ever since I put the feeder together, filled it and hung it up the bird population has all but evaporated from the garden. I am told that they will come back and indeed several birds do visit including an impressive posse of wood pigeons that clean up the fallen seeds. My hope was that a larger feeder would bring more birds that would eat more seeds. And, to be honest, I anticipated the enjoyment of observing all those extra birds thus enticed into the garden.

Monday is a day to rest and reflect and the bird feeder brought me right back to the book “Buddhism From Within” written by the late head of the O.B.C., Rev. Master Daizui MacPhillamy. He tells of how he heard a song that suggested a way for him to speak about Buddhism in plain English. The song was “Faster Horses: The Cowboy and the Poet” (Mercury Records, 1997). He describes it as being partly humorous, partly philosophical and basically about the meaning of life seen through the eyes of a seasoned old cowboy. His solution to life, in the song, was “Faster horses; younger women; older whiskey; more money!” The first chapter of the book is entitled ‘Faster Horses’ where, in plain English, Rev. Master Daizui launches into one of the problems of human existence: we’re never satisfied, we want more, larger, faster ‘whatever’s’. He is talking about the root of suffering, craving.

Incidentally, I’m not down on myself for the new bird feeder however it did bring to light a certain tendency towards believing that new equipment will get the job done, better and faster. In this regard I realize I have been delaying writing a number of things until I have my computer set up ‘just right’. This includes my contemplating buying a couple of items of equipment. Having seen the tendency towards ‘faster horses’ my resolve is to just get on with the writing; I hope that means more blogger entries too.

I’ve found that the more regularly one ‘picks up the pen and writes’ the easier it is to continue to pick up the pen and write, and the writing seems to get easier too. As with the pen so with faster horses, only in the case of ‘Faster Horses’ it’s letting go of them. With practice it gets easier, it’s never easy though.

One thought on “Faster Horses.”