On Monday afternoon I drove out to Elk Island National Park to take in some open-air. The snow had mostly melted in Edmonton so I was surprised to find the trails still filled with snow and hard going. The main lake, which stretches far into the distance was white and thick with ‘mystery’. Gazing out I pictured a woman waiting for her trapping folk to return, or stuck alone in a frozen cabin miles from anywhere, longing for company, any company. Being out in the white wilderness can do strange things to ones perceptions.

So when I spotted two black specks far away in the distance I became fixated on them with excited anticipation. ‘Were they moving’? ‘Yes’! ‘Men carrying heavy packs – really big packs’? Gradually as the specks advanced, excruciatingly slowly, they developed into animals. Closer still and two male Wood Bison emerged, taking their long journey across the frozen lake, perhaps in search of grazing.

They were like two four wheel trucks in an invisible traffic queue. A couple of steps (were they testing the strength of the ice?) then a few minutes stationary. Then a few more steps. I found myself mentally willing them to move, to move faster, to get closer, so I could fill my frame with hulking great brown fuzzy beings. But the wild walks it’s own walk and my wish for ‘Bigger, faster, closer, better’ made no impression. Of course! 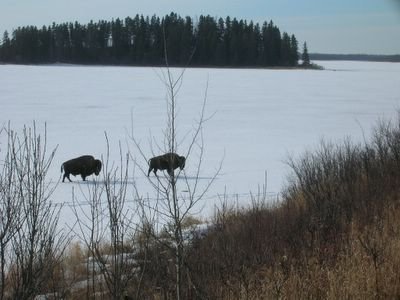 The person in the foreground is a photographer, ecstatic to encounter these grand creatures roaming free. As his companion and I retreated we fell into conversation. She told me about the thirty Bison due to fly next day, to Russia! Bison high in the sky, who would have thought.

There are warnings everywhere in the park not to approach the Bison since they are unpredictable and may charge for no apparent reason. They seem so heavy and ponderous however they can be light on their feet, it would seem.

So easy to be fooled by appearances isn’t it?

One thought on “Flying Wood Bison”