This was first posted in November 2005. I’d recently returned to the Edmonton Buddhist Priory after traveling to East Asia and the UK. Thank you Miles for suggesting this post be republished. 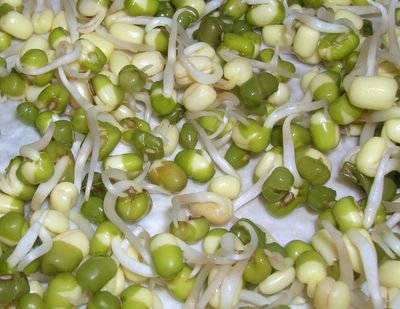 Mung bean sprouts, good enough to eat.
In order to ‘wake up’ the bullet hard beans one needs to soak them in water for 48 hours then, having softened up, they have the potential to sprout. Next they are drained and left in the dark to grow. (The soaking water is an elixir for plants, they love it.) It isn’t enough to just leave those beans, they need to be flushed with fresh water about twice a day or they will dry up. When ready, you eat them. They are very nourishing, but I’ll not go on about that.

I usually sprout green lentils and they are ready to eat in about three days. The mung beans seemed to take for EVER! Even then there were a few bullet beans remaining among the plump sprouted ones. Time to deal with this sort of project is in short supply however I knew I needed to sift out the hard beans, or I’d likely break a tooth on one of them. That’s time consuming work, “do I have time for this”? I asked myself “is it worth the trouble” I complained! Then I thought if there is time to sit and face a wall there has to be time to stand and pick through these beans. Dear Dogen Zenji, weep not for me! For those of you who may not be familiar with his teaching the nub of it is that it is a mistake to believe there is a separation between ‘practice’ and ‘daily life’. Here is a quote from Rules for Meditation by Dogen Zenji: “To live by Zen is the same as to live an ordinary daily life”. I hasten to add here that a goodly part of his life’s’ teaching was answering the question “Ok, so if that is the case why bother to practice then”?

A recent phone conversation inspired me to write the above since it pointed so clearly to meditation where ones spiritual potential grows ‘in the dark’, is watered by ones best efforts and then benefitted from (eaten) in ones daily life.

When all Else Fails.
What can you do? When you can’t let go?
Simply, Tenderly, Lovingly open your hands.
That’s being willing, to be willing, to let go!
Sometimes (quite often) that’s the very best one can do.