While preparing to travel to Japan back in the spring of this year there was little time to be making a wish list of places and things I wanted to see. Just making the basic arrangements was about all I could manage at the time. If I’d made one this triptych would have been on the list. I have always admired it and was so pleased to behold it in a temple near Nara. (perhaps somebody could enlighten us as to where I saw it please). 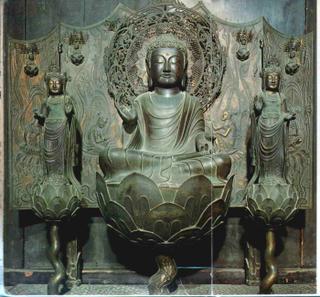 Having mentioned angels a few days back I want to point out that we having beings in our iconography called ‘heavenly beings’. You can see them in the screen behind the statues in the photograph. This image was copied out of a book.

I remember standing on the edge of the Grand Canyon a few years back and finding myself thinking “Oh, so this is the Grand Canyon”. Having seen so many photos of it I realized that I’d built up a image of how it would be, how I might feel etc. It was big and magnificent and it took me a moment to get past the slight disappointment of it not matching up to what I’d, unknowingly, expected. Seeing this triptych was similar, I had thought it was much larger than it actually was, I had imagined it to be part of an altar in a temple when it was, in fact, in a section of the temple where the temple treasures were on display. I love it, and like the Grand Canyon I had to pause a moment to get past what I had built in my mind. I guess this all points to the condition nature of the experience of the senses. In Buddhism we talk of six senses, the mind being the sixth. Interesting eh?