Recently while traveling I accumulated a number of small gifts, most of which I’ve passed on since returning to England. Each are a token of a happy meeting which, when passing them on again, are a token of a happy meeting and so it is that the merit of these gifts keep on circulating. Here are a few items that remained and came to Edmonton with me. 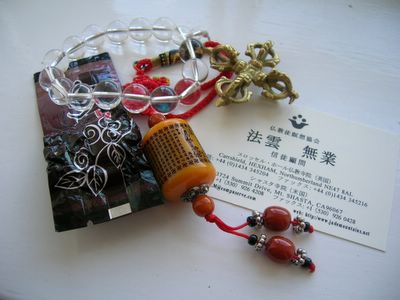 The metal object, a double dorge, was given me on leaving Vancouver in early April, so that has traveled almost full circle around the world. The name card is one of the few remaining from a stack of 100 given out in Japan. I learnt how to present and receive them in the correct and rather formal way. It was touching to see how people received and held them with great reverence and respect with both hands. They then read them slowly, the recipient lingering awhile to appreciate the kanji that pins down the exact meaning of ones name. The rosary made of pure crystal came from the Abbess of Cheng Hoon Teng, Malaysia and the small packet of green tea from a fellow pilgrim sitting on a wall waiting for a bus on Puto Island, China.  The item with the Scripture of Great Wisdom printed on it, given me in Taiwan, was passed along to an old Buddhist friend this afternoon.

The business of giving, receiving, keeping and passing on tokens of friendship came into sharp focus just before leaving England. I’ve been pondering on ‘objects of remembrance’ since then and you will see why from the following. On a visit to Throssel in the late 1980’s my father proudly gave me a pine tree in a pot. He was proud because he had remembered my Buddhist name, seen it on the plant label and bought the tree himself, with his own money. This tree was important for both of us, yes, a pinus mugo! It was subsequently planted and, over the years, I have watched it grow. Just before leaving for Canada I paid it a visit, thinking to take a photo for this blogger, and all I found was a stump! It had outgrown its space. Then, the other day, somebody sent me a photo of a statue, minus one arm, I’d given him fifteen years ago and earlier, in the monastery at Throssel, one of the monks pointed out a couple of item I’d given which he had kept, pride of place.  All objects of remembrance, remaining for many years, all pointing to the deep connections we have with one another. And when the token is broken, lost or cut down the connection is not broken, lost or dead they are after all just tokens. Friendship endures and writing this blogger has, in several cases, brought to light friendships from the past and new connections I didn’t even know about! I’m grateful and there is more bloggers to come on the subject of trees too!

The Buddha was asked if there was a place for friendship within the Dharma, he replied that ‘friendship is all of the Dharma’. If somebody, better than I at finding information, can find that reference I would be grateful. Oh, and the first thing my Master, Rev. Jiyu-Kennet, said to me was ‘Hello Friend’.

One thought on “Hello Friend.”