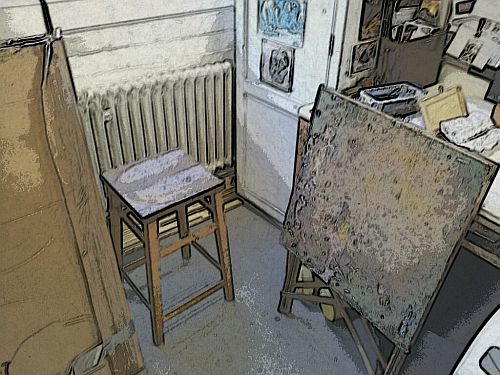 Not Norman’s chair
We are in the grips of snow and ice in Britain and in The Netherlands the entire population is in the grips of Ice Fever. Or were until yesterday. My Dutch correspondent reports:

Yesterday evening the complete national press gathered at the venue the Ice-Masters board meeting where a decision was being made….finally the chair people emerged with a press release; it is not going through, there is not enough ice and the temperature in the coming days is rising. The rest of the evening and night (in the media) was spent on the aftermath: the country is in mourning. Dutch airline KLM had announced it would not charge for cancellation of tickets and had been in the process of arranging extra inbound flights to get people back to the country in time, but alas. Today weather forecast bulletins are starting to go back to normal proportions instead of hours and hours of speculations about every possible scenario. BUT, computer models show the possibility of low temperatures end of next week, in the history of the tour it has happened that the preparations were canceled twice and the third time it was on, so this is by no means the end of the ice-fever.

And all to do with the national obsession with ice skating. Innocent enough.

I just makes me smile inwardly to hear news of an entire population mobilise by something which is just plain fun. That’s to skate 124 miles, touching on eleven cities, on their frozen canal system, if the ice is thick enough. For long enough. Just that. In the mean time here in Britain we are caught in the iron like grip of icy blasts, deadly roads and multiple pile-ups. Just in the county of Cumbria there were around 100 road accidents between 5.00 am and 11.00 am. That was yesterday when we had freezing rain and the dreaded black ice.

What we Britain’s mobilise around is the weather itself. What ever the weather, we have something to say. We converse with total strangers on the street about it. We complain, bitterly. We are just MAD about the weather especially when it’s life threatening. The worse the better. We mobalise around adversity. Almost a national past-time. It will pass and life will return ho hum – rain.

This is for a good friend who slipped in snow and ice the day before yesterday. She fractured her fibular. Let’s be careful out there folks.