Edmonton woke this morning to twelve inches of snow. We have been out shoveling. As I understand it you can incur a fine for not removing the snow from the pavement in front of your house. Not a hardship for me to be out playing with the snow, I’ve been waiting for this since late October! 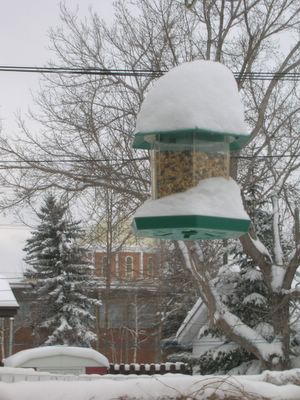 This morning, gazing out of the kitchen window at the wonderful white world I noticed a bird trying to land on the feeder. Of course I went out and removed the snow…and then refrained from loitering by the window waiting for the birds to arrive. Bird feeders can become like televisions, one can’t keep ones eyes of them.

I was here five years ago reminded by the flocks of birds swooping around the houses and trees. Together they make a distinctive sound, more than your average twitter. Something between a twitter and a squeak. There was snow on the ground then, lots of it. The people I stayed with put wood screws in the bottom of my shoes, now I have some fancy traction devices called ‘Yak Tracks’. Fine on snow but a disaster on the polished floors at Staples!

Yes, it is good that IT has happened at last, winter is not winter without some accumulation of the white stuff.

3 thoughts on “IT Happened”