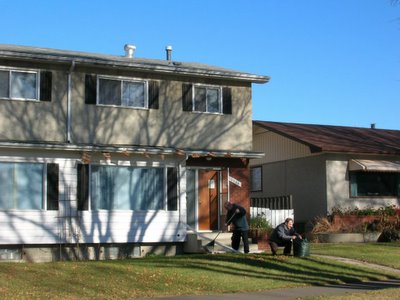 Last Sunday, during our working meditation period, the last of the autumn leaves were raked up by Chris and Mike.

I thought some of you might like to see what the Priory looks like from the front before we get into winter when the lawn will be permanently white until March. It has been an interesting time these past weeks as we all wait for the first snow fall. Sort of like waiting for the other boot to hit the floor. Last night there was a light dusting of snow but nothing serious. Traditionally it snows on October 31st but not this year so all of those ‘trick or treaters’ were able to be out in force in their costumes. I had quite a number of children turn up at the door on the 31st to receive their bag of ‘Cracker Jacks’. That is caramel covered popcorn for the uninitiated.

The Edmonton Priory is, as you can see, half of a semi detached house. In North America this kind of house is called a duplex by the way. There is a ‘half basement’, meaning that part of the basement is above ground. We use the basement for teas and talks and it has held over 30 people. The meditation/ceremony hall is the main room on the ground floor with a kitchen and dining room running along behind the main room. This is a house built in the 1960’s with the open plan arrangement so common then. Upstairs is an office, bathroom and two bedrooms, one for me and one for guests. The heating comes via a gas furnace in the basement, the warm air is blown along ducts and comes up through a number of openings in the floors. It’s very efficient. So that’s it, the place where I will be this winter.

Sometimes I catch myself looking around and realizing how fortunate I am to have a roof over my head, food in the fridge and good people coming to practice here. When out and about on the streets of Edmonton one sees a lot of people with their hands out for cash. Lots of people living rough there are, however, houses for homeless people, nobody could sleeping out in the winter in Edmonton. People do die of the cold each year though. Brrr!

Edmonton etiquette: When being dropped off at ones house the driver waits to make sure you have got into the house before driving off.

2 thoughts on “Last of the Autumn Leaves.”