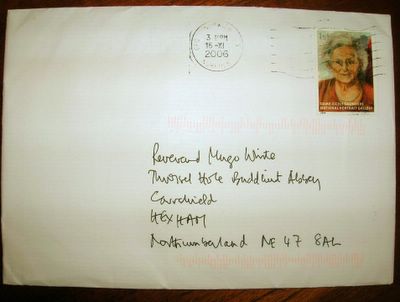 As I was about to recycle this envelope the stamp caught my eye. Now here’s an image of an older woman that does not attempt at disguise the fact, in my view, a good thing. People grow old and they look old and there is nobility in that, even when close to death or seriously ill. Why cover over the wrinkly neck and the wispy white hair? She looks out at us in her wide eyed way. What has shaped her life? What has she shaped in her life? Well, it turns out she was another remarkable woman pioneer, in the field of hospice care for the terminally ill.

An Obituary for Dame Cicely Saunders, July 2005.
St Christopher’s hospice, which was founded in 1967 by Dame Cicely Saunders, who has died aged 87, is a beacon for the supposedly terminally ill and their families. Situated in the London suburb of Sydenham, it led to the founding of hospices around the world employing her principles.
By using drugs scientifically to manage pain, and by allowing relatives to spend a great deal of time with her patients, Saunders altered the bleak concept of death for thousands of people. To her, dying was part of life; her creed was Living Before Dying. Read more….

2 thoughts on “Living Before Dying”