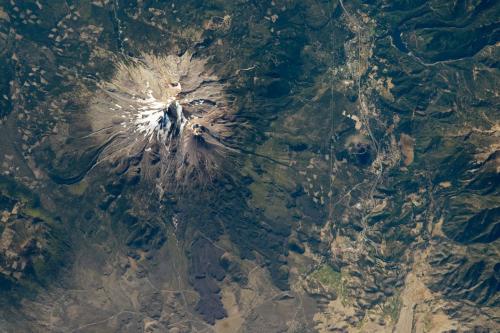 This shot was taken from the ISS (International Space Station) on September 20, 2012, and shows the region around Mount Shasta, a 4300 meter peak in northern California. It’s technically dormant – it erupted last in 1786. In geologically recent history it’s erupted every 600 years or so, but that’s not a precise schedule, so geologists keep an eye on it, as they do many of the peaks in the Cascades. As well they should.

Shasta Abbey is in this photograph by the way. Amazing photograph. Thanks for the link J.