I’ll not pause too long to talk as I am about to eat breakfast before leave for the airport to return to Edmonton. It has been a good week; taking Refuge with fellow monks of our Order, encountering a ten year old monk and his guardian practicing within the Tibetian tradition, visiting spring in Vancouver, and receiving a variety of offerings from several members of the congregation. Very many thanks to all for making me so welcomed. Visiting the temple dedicated to Kanzeon, Bodhisattva of Compassion, was a highlight of my stay. 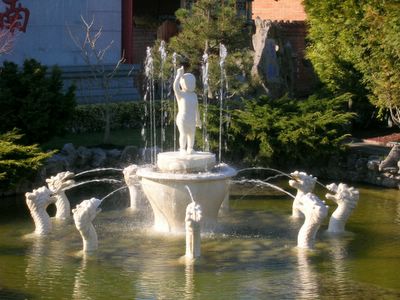 In the ceremony we do in our tradition for the Buddh’s Birth in May we have a miniature version of what is depicted here. As the celebrant pours sweet tea over the baby Buddha’s head with a ladle there is a verse: “Nine Dragons came forth to bathe the Blessed One”. At that point in the ceremony a novice, discreetly poised behind the altar, plugs in the power for the pump which then continuously pours water over the statue. Many is the time I have crouched anxiously waiting for the moment to plug in the pump praying everything will work. Mostly it did. (There is spiritual teaching in this however I don’t have the time to go into that now, maybe another time.)

Last Sunday we, the monks at Lions Gate Buddhist Priory where I have been staying for the last week, went to pay our respects at the Kuan Yin Temple in Richmond, BC. It is said to be “The most exquisite example of Chinese palatal architecture in North America”. It certainly is big! The web site of The International Buddhist Society is well worth a visit as there are more photographs of the temple as well as Buddhist teaching.

While we were taking a break from our tour a couple of nuns appeared briskly from around a corner and we fell into greeting bows followed by general chat. There are thirty nuns living in the temple and as far as I could tell a number of them were there as it was too cold down in there temple in New Mexico during the winter. As we were speaking the Abbot, Venerable Guan Cheng, emerged from the meditation hall with a flock of devotees. He’d been giving the last of a series of lectures and after several group photos on the steps of the hall he came over to say hi. We spoke briefly and then took him up on his invitation to join in celebratory sweet snacks in the dining room along with all of the devotees. The nuns were glad to inform us that they had made the cheese cake in the temple. It was good.