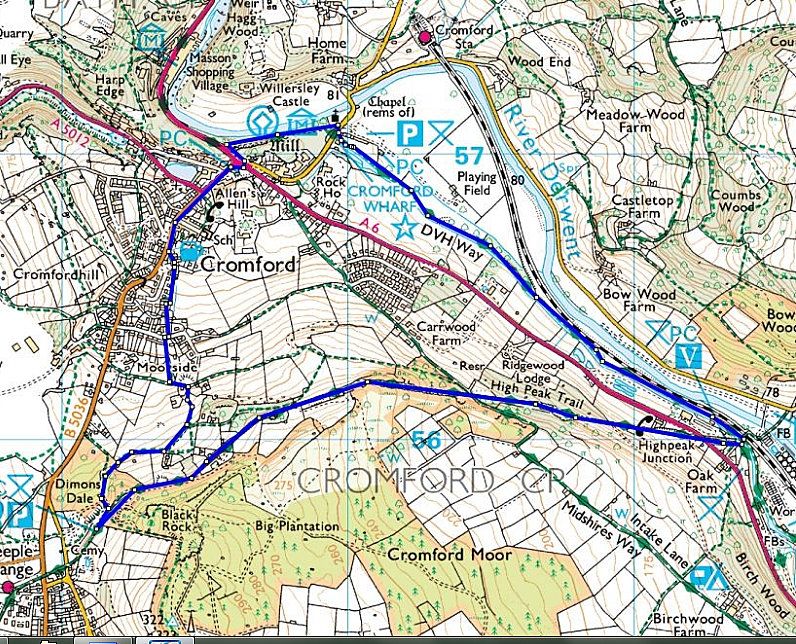 Walking – In Derbyshire
Yesterday I caught a train from Nottingham to Cromford and walked along (actually up then down) the High Peak trail to the Hepton Tunnel. Very cold, very snowy and so beautiful it made me cry. I was meant to walk with my friend but she had to cancel at the last-minute to wait for a phone call from the plumber to come and fix her boiler. I almost didn’t go but I had my backpack ready with a flask of tea and sandwiches made, I was already wearing my salopettes, boots on so just gave myself a bit of a mental push to get myself going (oh, and thanks for the lift to the station, Nigel!).

The walk was very tough, there being two very steep and long inclines. I had intended to circle round the local quarry back to Cromford but the snow was too deep, I couldn’t see the path well enough and I had left my trekking pole at the station. Back on the Trail a couple of walkers asked me ‘have you made it to the tunnel? It is beautiful!’. I hadn’t intended to go that far but, after a chilly picnic sat on my rucksack to avoid sitting in the snow, I pressed on.

The photo of the tunnel with its chandeliers of icicles do not do the experience I had of seeing them justice. It was simply magical. Being there on my own, my feet crunching through the fallen icicles, with the snow still coming down outside, was worth all the effort of getting there.

I missed my friend and thought about how she would be fed up, not being able to join me. And it was OK on my own too. I walked mindfully, and I could contemplate, imagine, notice my anxieties, keep dropping those thoughts and carry on, walking and training.

Reflecting – On Being With Dying
What is this all about? This plan to walk all that way in Wales? I am quite sure it has a lot to do with my dad’s death last year. He died quite suddenly, not unexpectedly and from the phone call from the paramedic to his bedside as we watched him die it was… intense; distressing, painful, exhausting and very, very draining. Dad knew what had happened to him was likely to end in his death. He must have realised when the aneurism burst and started to have a catastrophic effect on his body. He certainly knew when the doctor at casualty in Lincoln said ‘Mr Hodges, if you do not have this operation, you will die’.

They couldn’t do the operation in Lincoln; they do these operations in Boston, a sick-making, crazy, drive through the night in an ambulance, with the siren blaring as the driver overtook traffic around blind bends and took corners at a speed only someone with the kind of experience he must have had could do. Despite how close to death dad was at this point and the urgent need to get him to Boston for the op, we stopped. Dad was in pain, and this became the priority. Pain sorted, we set off again and arrived into the hospital.

There was a brief, very brief, moment when I was with him before he was taken to theatre. I thought afterwards could I have said something more? This was actually the last time he was conscious while I was with him. He never regained consciousness after the 6 hour operation to try to fix his heart. Relatives arrived, decisions had to be made. The loss of blood that had occurred over the time it had taken, from the emergency call he made, the journey to Lincoln then Boston, had taken its catastrophic toll on his body. We were told he had probably suffered brain damage, a stroke, his kidneys had failed, it was a miracle he survived the operation. He was being kept alive by a plethora of machines, medication and the gentle, but sometimes necessarily brutal, care of the medical team.

For a man of his age, 86, he was very fit. Of course he was. He still rode his bike around the village where he lived and my love of walking is definitely inherited. So he remained breathing and living.

After much intense consultation and discussion, a wait of a further 24 hours to see if there was any sign of improvement, we were in agreement that it was time to allow my father to die. I absolutely know and knew then that it was the right decision. In some ways it would have been better had he not survived the aneurism.

But survive he did, for those few days. And during all of that time I was acutely aware of…, not sure I can put it into words, not sure I want to pin it down in words.

So I sat with dad; from the moment I received the phone call. I was sitting with him while Nigel drove me to Lincoln hospital. I sat while we careered through the countryside to Boston; sitting, breathing, being with my father, whether conscious or unconscious. I sat with him, not clinging on, not loading him with any desires or my own selfish wishes. And when things became tricky, when difficult decisions were having to be made, when the emotions and distress of others around me became more magnified, in the middle of this, within my own emotions and distress, I went to a place that was very still. A place that training had helped me to find. It seems a simplification to say that it helped me to get through the experience of seeing my father die. I had a sense that I wasn’t trying to get through anything. I knew that all that I was doing was being there and that everything was OK.

So, this walk is about a desire to achieve, it is about sangha building, it is about raising awareness of the Field of Merit and it is in recognition of training and the deep sense of gratitude I feel.

9 thoughts on “Reflective Practice In Action – On Foot – In Derbyshire”