Walking – In Derbyshire
Yesterday I caught a train from Nottingham to Cromford and walked along (actually up then down) the High Peak trail to the Hepton Tunnel. Very cold, very snowy and so beautiful it made me cry. I was meant to walk with my friend but she had to cancel at the last-minute to wait for a phone call from the plumber to come and fix her boiler. I almost didn’t go but I had my backpack ready with a flask of tea and sandwiches made, I was already wearing my salopettes, boots on so just gave myself a bit of a mental push to get myself going (oh, and thanks for the lift to the station, Nigel!).

The walk was very tough, there being two very steep and long inclines. I had intended to circle round the local quarry back to Cromford but the snow was too deep, I couldn’t see the path well enough and I had left my trekking pole at the station. Back on the Trail a couple of walkers asked me ‘have you made it to the tunnel? It is beautiful!’. I hadn’t intended to go that far but, after a chilly picnic sat on my rucksack to avoid sitting in the snow, I pressed on.

The photo of the tunnel with its chandeliers of icicles do not do the experience I had of seeing them justice. It was simply magical. Being there on my own, my feet crunching through the fallen icicles, with the snow still coming down outside, was worth all the effort of getting there.

I missed my friend and thought about how she would be fed up, not being able to join me. And it was OK on my own too. I walked mindfully, and I could contemplate, imagine, notice my anxieties, keep dropping those thoughts and carry on, walking and training.

Reflecting – On Being With Dying
What is this all about? This plan to walk all that way in Wales? I am quite sure it has a lot to do with my dad’s death last year. He died quite suddenly, not unexpectedly and from the phone call from the paramedic to his bedside as we watched him die it was… intense; distressing, painful, exhausting and very, very draining. Dad knew what had happened to him was likely to end in his death. He must have realised when the aneurism burst and started to have a catastrophic effect on his body. He certainly knew when the doctor at casualty in Lincoln said ‘Mr Hodges, if you do not have this operation, you will die’.

They couldn’t do the operation in Lincoln; they do these operations in Boston, a sick-making, crazy, drive through the night in an ambulance, with the siren blaring as the driver overtook traffic around blind bends and took corners at a speed only someone with the kind of experience he must have had could do. Despite how close to death dad was at this point and the urgent need to get him to Boston for the op, we stopped. Dad was in pain, and this became the priority. Pain sorted, we set off again and arrived into the hospital.

There was a brief, very brief, moment when I was with him before he was taken to theatre. I thought afterwards could I have said something more? This was actually the last time he was conscious while I was with him. He never regained consciousness after the 6 hour operation to try to fix his heart. Relatives arrived, decisions had to be made. The loss of blood that had occurred over the time it had taken, from the emergency call he made, the journey to Lincoln then Boston, had taken its catastrophic toll on his body. We were told he had probably suffered brain damage, a stroke, his kidneys had failed, it was a miracle he survived the operation. He was being kept alive by a plethora of machines, medication and the gentle, but sometimes necessarily brutal, care of the medical team.

For a man of his age, 86, he was very fit. Of course he was. He still rode his bike around the village where he lived and my love of walking is definitely inherited. So he remained breathing and living.

After much intense consultation and discussion, a wait of a further 24 hours to see if there was any sign of improvement, we were in agreement that it was time to allow my father to die. I absolutely know and knew then that it was the right decision. In some ways it would have been better had he not survived the aneurism.

But survive he did, for those few days. And during all of that time I was acutely aware of…, not sure I can put it into words, not sure I want to pin it down in words.

So I sat with dad; from the moment I received the phone call. I was sitting with him while Nigel drove me to Lincoln hospital. I sat while we careered through the countryside to Boston; sitting, breathing, being with my father, whether conscious or unconscious. I sat with him, not clinging on, not loading him with any desires or my own selfish wishes. And when things became tricky, when difficult decisions were having to be made, when the emotions and distress of others around me became more magnified, in the middle of this, within my own emotions and distress, I went to a place that was very still. A place that training had helped me to find. It seems a simplification to say that it helped me to get through the experience of seeing my father die. I had a sense that I wasn’t trying to get through anything. I knew that all that I was doing was being there and that everything was OK.

So, this walk is about a desire to achieve, it is about sangha building, it is about raising awareness of the Field of Merit and it is in recognition of training and the deep sense of gratitude I feel.

Posted by Adrienne Hodges
Following on from my last post the question I have had in my mind has been what stops me from doing what is good to do?

And lo and behold daily life brings me an answer. On Tuesday I facilitated a couple of workshops for parents. We talked about how, quite often, we can focus on housework and chores (in some to the point of being Obsessive/Compulsive)as a way of avoiding trying to resolve difficult relationship problems. One parent spoke about how she polishes the floor until it is spotless because she does not want to address the fact that her son is angry all of the time and won’t speak to her.

This level of honesty and willingness to look at the truth was both humbling and encouraging. I wondered what I do as avoidance techniques? Here are some of them: I watch too much TV, I agree to the requests/demands from my family far too readily and I decide too quickly that I am too busy, that I haven’t the time or that I really do need to search EBay for that next bargain fabric!

Sharing my practice with the readers of Jade Mountains is something that I want to give a regular commitment to but the doing of it has been a bit of a struggle. I have my well-practiced methods of avoidance and I see them for what they are. I am not sure that searching for the reasons for my reluctance or the source of my difficulty is particularly useful or relevant, however my awareness about what I do means that I want to change and do things differently.

And this is me……. getting on with it!

“We shall not cease from exploration
And the end of all our exploring
Will be to arrive where we started
And know the place for the first time.”

From Four Quartets by T.S. Eliot

When times are tough, whether it is the fear/anxiety described by Andrew or just tough times, words of wisdom appear. I read the above poem years ago at school and the words actually mean something to me now and are a comfort.

It’s winter, there is a recession; bad news can seem to dominate and this affects my mood and viewpoint. I take refuge; and the words proffered this too will pass had me dissolved in tears of gratitude and relief.

So when times are hard, and they are hard sometimes!……. even though the mind and habits lead me to try and fix the problem I can remind myself that there is no fixing. Embrace everything that comes with compassion and love. And then, there is taking action, doing the next thing, going, going, going on beyond…..to arrive where we started and know the place for the first time. 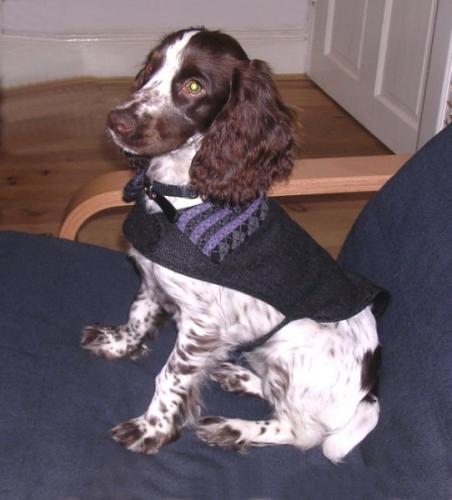 Daughter asked me to dog sit today as she was working late. I took the opportunity to use this gorgeous creature as a model for that dog coat I just had to make. She is six months old and, as she is named, completely Dottie!

The other day I was talking to someone about a difficulty I was experiencing; not a major problem, just something that had cropped up that I wanted to talk through. I had hardly started to describe my issue when up came a suggestion, a piece of advice, from my friend. So why did that make me feel uncomfortable?

The wish to help others is there for many people and as Buddhists we train not just for self, but also for others. I have been involved in the helping side of things for many years. My motivation for this is probably quite complicated and rooted in my past. I have asked myself questions; ‘why do I do this work?’, ‘what are my intentions?’ and also ‘does what I do really help?’ Similar to Andrew, I was also influenced by what other people thought I should be doing. And there was more than that; I had wish for fulfillment, approval and even a distraction from my own need for help. I know from experience that acting on these needs and intentions is stressful, tiring and also it lessens the likelihood that anyone is helped. I am not beating myself up here; I am simply recognising some of what has driven me in a particular direction and then wanting to change.

In my early days of working as a helper I frequently offered solutions, and proffered advice, therefore missing what was actually going on for that person because I wasn’t listening. By rushing to solutions I also made assumptions about thoughts and feelings, most probably wrong ones, again because of not listening.

Listening and the wish to help is a skill that requires awareness, not just of the other person but more especially of the self. Some years ago an excellent teacher described this as getting yourself out of the way. Isn’t this what meditation is all about? Are we not seeking to abandon our opinions and our personal points of view, ourselves?

In giving advice what we risk saying to the person is ‘you do not seem to be able to work this out for yourself’. Everyone has the capacity to learn and change and what really helps is being encouraged to talk, being listened to and trust that something happens when given this space to be with our koan ….. when we do our own practice.