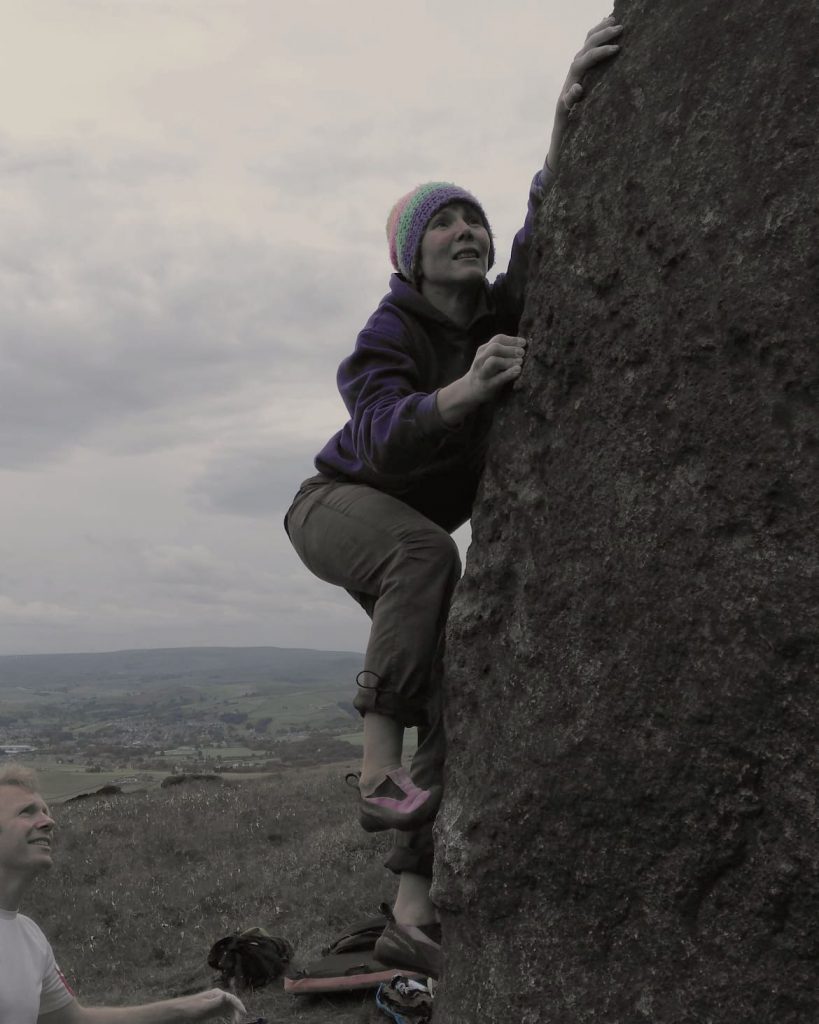 Kasia climbing in Yorkshire, just take a moment to take a close look. I went first to the expression on her face, to her eyes clearly directed towards here next good move. One good move, and then the next. Then there are her limbs coordinated; arms and hands and fingers and legs and feet and toes moving at the bidding of her intention to move, upwards. The whole of her enlivened with intention. Energized. Her hand, her fingertips glued to the rock, there is just a whisper of a handhold in what is probably Gritstone, this being the Peak District.

But see, she isn’t in danger so close to the ground and with a guide close by too.  Yet she is going, intent on getting up that rock face. Maybe she will be in danger of falling from a height later on. For now, it is just a matter of the next move. Here’s the embodiment of commitment, mentally and physically.

It is quite common for people to get stuck, tread water, walk in circles not knowing which way to go, what to do. People in this state wonder and question themselves, ‘what is my purpose in life’ while wishing and wanting to move, to move out of the impasse they are stuck in. Which foot to move first where is the next handhold. In order to move, to make a decision I need to know why, first! My experience is that purpose emerges out of action.

Our young climber is searching for a handhold, her left hand connected to her arm seems to be impossibly long. (I missed that extending arm when I first saw this image.) As with climbing so with life in general. One needs directed intention, not so much for a goal out in front more to keep moving. Move a hand, move a foot, keep moving and sometimes one has to make a seemingly impossible reach, or traverse and find a new line in the rock. That can feel dangerous, risky, feels like putting ones very life on the line. Yes.

The life of the Buddha Shakyamuni is a great example to follow. He was clear, he intended to find the cause of suffering – and he did. Then he taught the Four Noble Truths so we can do the same. Living life feels like climbing up a cliff face, even tackling a perilous overhang or two is called for.

So do reach for that impossible handhold, we are designed to do that.

This is for a young man who is circling a cliff face, he knows it. I trust he will extend himself and climb.

10 thoughts on “Searching For a Handhold”