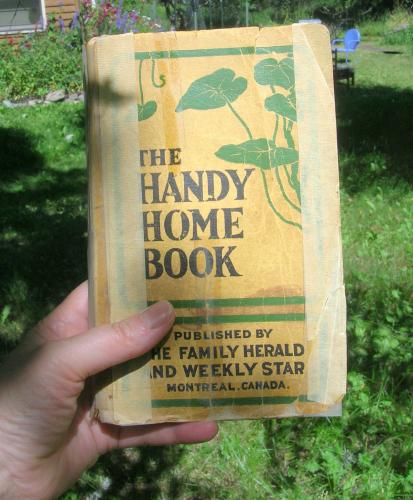 I picked up this book at a yard sale yesterday. Found, hand written, on the inside page,
This is a good book. Read and be wise.
In 1951 the Montreal Star, the most powerful English language paper in Canada, launched its Weekend Magazine supplement The Herald and Weekly Star, with an initial circulation of 900,000. Another hand written note states, Bought Blue suit $40.00 for Easter 1953 at (maybe) Hess Store. and Bought aluminum chairs from club, May 14-53. So this book more than likely is a compilation of information gleaned from the first two years of the magazine’s life. It’s described as An Encyclopedia of Useful Information. There are recipes and instruction for; Making a Bearskin Mat, Bicycle Enamel, Carbolic Soap, To Purify Rancid Lard and my favorite, Sticking Labels on Tin which calls for isinglass dissolved in acetic acid. 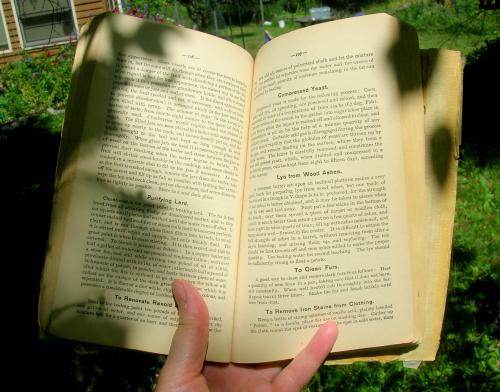 I’ll remember the sad woman who sold me the book. And I’ll also remember the book’s yellowing crumbling held-together-with-masking-tape pages. Rich human history one can embrace, and smell.

A train is hooting and howling as it passes below the garden on it’s way to Chicago. I see there is an entry First Railways in America. That was a line from Boston to Quincy, Mass., opened on April 17, 1827, And on the next page:

Origin of “Canada”. The word Canada is derived from the Huron-Iroquois Indian word “Kannata,” meaning a collection of huts! (my exclamation point).

Who would have thought that the dissemination of information would travel so far so fast. From down home books like the one described, to the Internet today.

But is it going anywhere?

One thought on “Smell The Information”