A boundless host of enligtening beings, the congregation at the site of enlightenment, were all gathered there; by means of the ability to manifest the lights and inconceivable sounds of the Buddhas, they fashioned nets of the finest jewels, from which came forth all the realms of action of the spiritual powers of the Buddhas, and in which were reflected images of the abodes of all beings.

Also, by virtue of the aid of the spiritual powers of the Buddha, they embraced the entire cosmos in a single thought.

Their lion seats were high, wide, and beautiful. The bases were made of jewels, their nets of lotus blossoms, 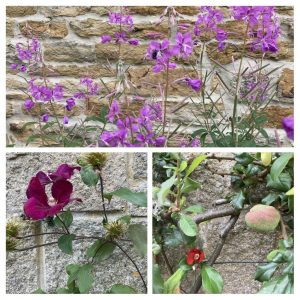 their tableaus of pure, exquisite gemstones. They were adorned with various flowers of all colours. Their roofs, chambers, steps, and doors were adorned by the images of all things. The branches and fruits of jewel trees surrounded them, arrayed at intervals.

For those who do not have a stable ‘abode’. It may be humble, it might be compromised (our psycho/physical abode), it could look like nothing very much at all from the outside. From the inside, though?

2 thoughts on “The Abode of Enlightening Beings – Our Abode”