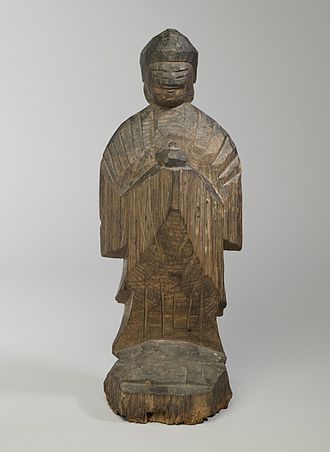 Yakushi (Bhaishajaguru, The Buddha of Healing) by Enkū (1628-95). Brooklyn Museum.
Up to now I’ve tended not to write a lot about the more devotional aspect of Buddhism, however here I go! The custom within our religious Order is to celebrate, in the form of a ceremony, a number of Bodhisattva’s. This Sunday it is the turn of Bhaisajya-guru Tathagata, commonly referred to as the Medicine Buddha.

So. Bhaisajyaguru is known as the (“King of Medicine Master and Lapis Lazuli Light”), and is the Buddha of healing and medicine in Mahāyāna Buddhism. Bhaisajyaguru then is a ‘doctor’ who cures dukkha (suffering) using the ‘medicine’ of his teachings. participating in a ceremony, or other kinds of religious devotions or practices does not cure physical or mental aliments or pain. Not in the ordinary sense of the word cure anyway.  That’s magical thinking. The ‘illness’ that’s cured is dukkha (suffering or unsatisfactoriness).

The intention when attending a ceremony is not to get something for oneself or for others, a healing for example. It’s an offering, an act of generosity. The offering is actually spiritual ‘merit’ generated when entering  into and participating whole heartedly – in anything really. At the end of a ceremony the merit is offered for the benefit of all beings. And you may well ask. How does that work? The short answer is that merit ‘works’ because of the teaching of Anatta, non-self. Non separation of selves. No gaps.

What is the medicine? What is the teaching of this particular Bodhisattva? I’ve been looking into it! There’s a lot to get through and I’d not claim to have studied in depth. The subtext of the teachings coming out of the Medicine Buddha Sutra is that devotees shall be relieved of all that they do not wish to have (suffering caused through natural disasters, starvation for example.) and to have all that they wish for (“to have the inexhaustible things that they require, and relieving them from all pains and guilt resulting from materialistic desires”). One of five aspects of suffering is described thus: union with what is disliked is painful, separation from what is liked is painful, not to get what one wants is painful. There it is – suffering, or an aspect.

Understood from the point of view of faith, the teaching that cures suffering is to know, while heading into daily life challenges, there is nothing fundamental wrong, missing or out of place. Life is not a mistake nor is death. We already have within ourselves what is need to take the next step.  And, and especially AND meditation and devotional practices, be they Buddhist or not, are not a panacea.

And don’t you love this?
The ancient Aryans who brought the Sanskrit language to India were a nomadic, horse- and cattle-breeding people who travelled in horse- or ox-drawn vehicles. Su and dus are prefixes indicating good or bad. The word kha, in later Sanskrit meaning “sky,” “ether,” or “space,” was originally the word for “hole,” particularly an axle hole of one of the Aryan’s vehicles. Thus sukha … meant, originally, “having a good axle hole,” while duhkha meant “having a poor axle hole,” leading to discomfort.
Copied from here.

4 thoughts on “The Healing Buddha”