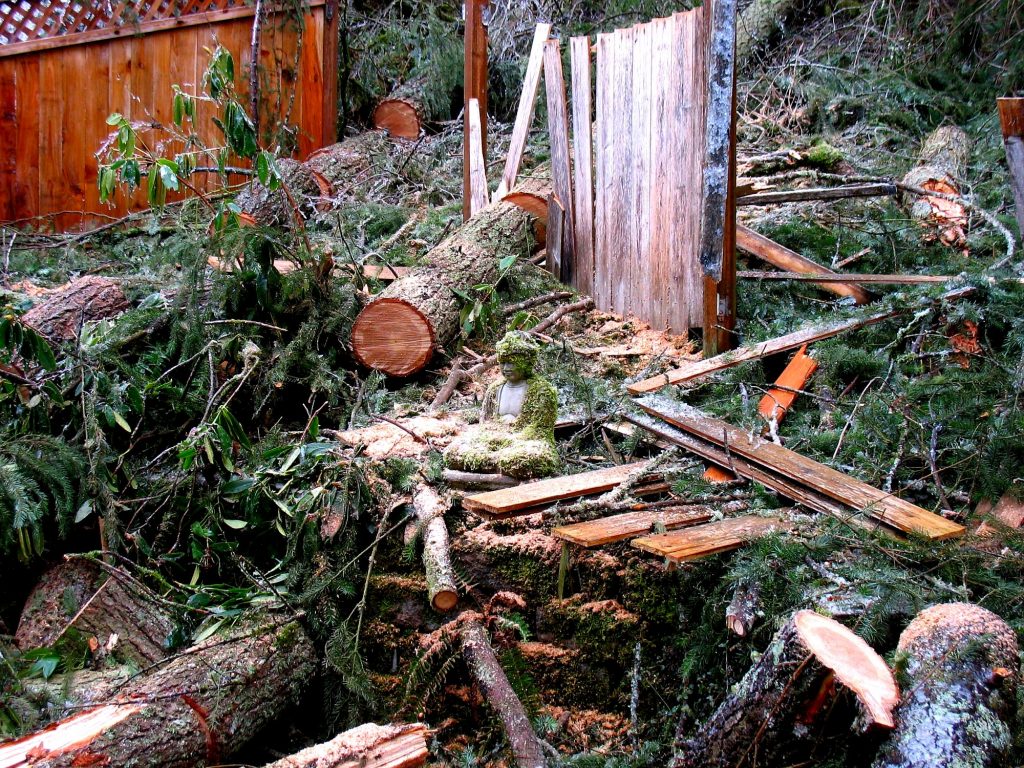 When all around is falling trees
to run?
to hide?
to freeze to the spot?

Within fear
there is that
Which cannot
be destroyed

The photograph was sent to me by a friend in Oregon.
I wanted to share a photo with you which is my reminder to remain still. I had 3 large trees hit my roof in December during a particularly harsh ice storm (they’re saying the worst in 50 years) and after they were removed from the house, my back yard was pretty much demolished. And yet here’s Buddha, sitting still in the middle of it!

Yes, Buddha images have a way of reminding the beholder of immovability and by extension indestructibility. And it isn’t just because a Buddha statue isn’t going to physically move anyway! They seem to reflect back a Truth about ourselves which lies just below everyday consciousness. There are many ways to talk about this however talk will not make it real. Even sitting still physically oneself,  in formal meditation, most likely will not confirm this truth in your own mind. Although it can be confirmed for those who are in hugely vulnerable circumstances. (More on that another time.)

What does bring this deeper truth to the surface is AFTER  pulling through something which you thought would destroy you. Grief can be like that. Unbelievable physical or mental pain can be like that. And having your home nearly destroyed can be like that. My correspondent wrote: Of course, I am also grateful for my many years of Buddhist practice, which has helped me to deal with the stress of the consequences of the storm and the continuing wintry weather we’re having.

I’d like to say that the The indestructible You is ever-present, in all circumstances,  you don’t need to manufacture or conjure up something more than you are already. I’m reminded of when I was walking (scrambling) along Sharp Edge with my walking companion, back in the glory days of late summer. Reflecting on the climb he remarked I didn’t appear that scared. I was! But somehow I was able to remain reasonably composed in the midst of testing physical circumstances. Call it survival instinct, call it what you like.

Up there on an arm of Blencathra  that which is ever-present PROVED  present. That’s the case too for the ordinary every-day of the very ordinary week – we just don’t notice. Which is just as well.

5 thoughts on “The Indestructible You”