Elk Island National Park is an hours drive East of Edmonton. It was wonderful to be out in open country, to breath in the air, drink in the sights and generally relax and recharge. The trails were closed apart from one or two that had been ‘groomed’ for cross country skiing. Walking on them is similar to walking on a soft sandy beach, heavy going.

I was on high alert since there are bison abroad which are said to be unpredictable; they may charge, or not. Signs beside the road warn, “Do not approach the Bison” Not likely! The Elk are also prone to charge if caught unawares. The ones I saw were shy and quickly bounced off after seeing me. Other wild life spotted; a few birds pecking out a living, the odd squeaky critter in the brush and a man on a snow plow. The lake, with Elk Island in the middle, was held in frozen stillness. I was tempted to walk out across the ice to the island, however wisdom won.

It is all too easy to become stale and dusty staying in the ‘known’. So it was good to make the effort to get out of town into the wider world. As it happens I’ve a couple of anniversaries coming up and, spurred on by several members of the congregation, I decided to celebrate them with Rev. Master Koten and his disciple over in Vancouver. For somebody who travels quite a bit I can be surprisingly reticent about packing and leaving. I fly on Friday and return the following Saturday. So, in a few short days, I’ll be up in the sky with the birds and will probably not be making regular postings while away. 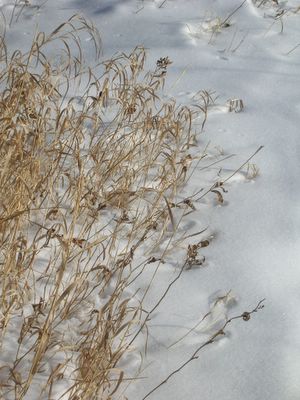 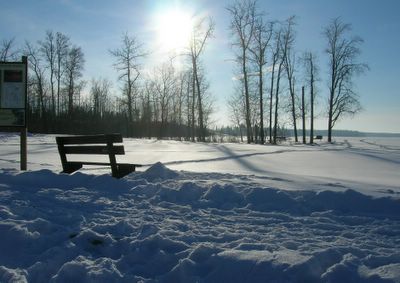 Late afternoon, the lake is to the right.

When I get the time I’ll publish my snow photos on Flickr.

3 thoughts on “A Wider World”