There is an article on the Lions Gate Priory website titled ‘Reaching’. The author speaks of the struggle with chronic-pain and of insights into practice gained as a consequence. Here is the first paragraph and a bit of the second to give you an idea of the article:

“I’ve been living with chronic-pain for a long time. It originated from a bad fall and has become worse with time, probably overlapping with the aches and pains that come with age. Lately, physical pain has slowed me down. With being slowed down, I often find myself horizontal, letting my mind drift. At first I criticized myself for doing this, and then, when I didn’t find the will to change, I thought well I’ll just watch my mind drift then.

Lately I’ve been mindful as I mentally drift, which might sound contradictory but, in my experience, it isn’t necessarily a contradiction…..”

Tomorrow I plan to go to Elk Island, a local National Park, and I’ll take a day off from blogging too. Back on Tuesday.

The following is from Blogging and the Wisdom of Crowds.

If an essential part of Web 2.0 is harnessing collective intelligence, turning the web into a kind of global brain, the blogosphere is the equivalent of constant mental chatter in the forebrain, the voice we hear in all of our heads. It may not reflect the deep structure of the brain, which is often unconscious, but is instead the equivalent of conscious thought. And as a reflection of conscious thought and attention, the blogosphere has begun to have a powerful effect.

The author goes on to talk about the effect the huge rise in the number of blogs, coupled with tag’s defined by ‘the people’, is having on the structure of the internet. I don’t pretend to have my head around this to the extent I could comment about it. So, if you’re interested in the goings on behind the scenes of the internet and how its structure is being changed by ‘us’, then this article is worth taking a look at.

I found it somewhat disturbing when I bumped into the phrase ‘constant mental chatter’ in connection with blogging! Buddhist Blogger Beware! I ask myself, ‘Do I really want to add more to the voice we hear in the forebrain’? I aspire to sit still in the midst of that within myself daily. Partaking of the ‘global brain’ through blogging is a challenge and, for the moment, it’s worth it.

Over the past couple of weeks, since being more involved with other people writing Buddhist weblogs, I’ve gained a new appreciation of their place in practice. Offered and received in their highest form, the blogs can be understood as an expression of the Sangha Refuge. I know I benefit from sharing the inner workings of others walking The Path. And there is the offering of that which comes from behind the words too.

A long time friend in the Dharma wrote me the other day speaking about his enforced down time due to chronic back pain.

He reports: During the last few weeks I have had to drop, one by one, all my plans for the immediate and medium term future as it became clear that I was going to be out of action for some time. Actually, dropping things can be quite a therapeutic activity in itself as I’m sure you know.

And then he went on to say: My other therapeutic activity has been lying in bed listening to Gilbert and Sullivan operas on a personal CD player. “In a contemplative fashion/ and a tranquil frame of mine/ Free from every kind of passion/ some solution let us find. (Gondoliers).

Here is the full verse sung by all:
In a contemplative fashion,
And a tranquil frame of mind,
Free from every kind of passion,
Some solution let us find.
Let us grasp the situation,
Solve the complicated plot —
Quiet, calm deliberation
Disentangles every knot.
Gondoliers, Gilbert and Sullivan Act 11
Not half bad ah? 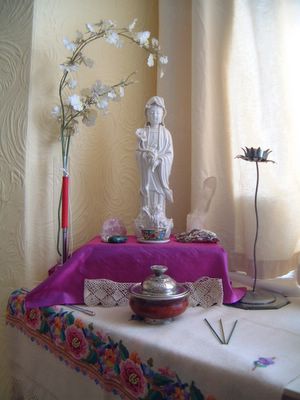 An altar can be where lovable things and unlovable things can go; as offerings. A letter that landed as lead in the heart, books and papers which represent an upset, a shell collected on a walk, a photo of a person in need. Tonight I put some items on the altar, lit some incense and made bows. Tonight I also remember Wayne who took his own life.

It’s interesting about Wayne. Jim (not his actual name) had kept Wayne from shooting himself and bailed him out of trouble enumerable times but in the end Wayne could not be stopped, he shot himself. And his good friend stopped shaving, face hairs were neither cut nor trimmed.

About two years latter, for pressing practical reasons, Jim’s beard and moustache were shaved off. Their removal brought up strong memories of Wayne. Anger at what he’d done, grief too. Yes, that was a grieving beard and now it is on the altar.

There is nothing that can’t be put on the altar of ones heart, or carried until the time is right to shave it off.

If I am honest, and I’m bound to be, the devotional side of the practice I first encountered in Zen Buddhism was not an aspect I was naturally drawn towards. In the application form for my first retreat I put this plainly, and nearly didn’t get accepted as a consequence! This I was told about much latter, thankfully. As the years have passed I’ve seen, as I said to the former head of our Order, “I’m devotional in spite of myself”! There is something more powerful than my own thoughts and opinions, which has me making bows, offering incense, reciting and singing scriptures and the like, willingly.

The way I see it, each person enters the corridor of practice carrying what they know. Some enter with a meditation cushion while others enter at the other end, so to speak, with incense stick in hand. Later they may meet and leave, hand in hand, carrying a cushion and incense stick. This has been the way it’s been for me, but not necessarily the way for all.

I came across an image of a early Japanese monk, Kuya Shonin, who is depicted with six small figures of Amida Buddha emanating from his mouth representing the six characters of the written Nembutsue chant. Looking at this image it doesn’t make sense, you could say “Wow! that’s really weird”. It’s a disturbing image, in the way that one can be ‘disturbed’ by the Truth. I can’t explain it rationally, however when viewing it there’s the same sense of being brought up into myself when standing before an altar. Or, as I remember it, when walking in the great shrines in Japan and China I visited last spring.

So, sometime, somewhere, in the middle of a corridor I met myself anew. I’m as happy to bow to the stars and the mountains as at an altar, and I’m so very grateful for the forms that have been handed down and which are part of daily practice. Following them causes me to remember why it is that they are not necessary.

I read a bit about Kuya Shonin, the internet is just so amazing for turning up what one is looking for. His life both as a lay devotee and latter as a monk is impressive.