If this butterfly flapped its wings in the Amazon who know what would happen on the other side of the world! Or how fast.

I guess everybody has heard of the ‘butterfly effect’ which is the popular way to make reference to something really very amazing. Namely the Chaos Theory. The subject of chaos came up a few days ago when I was sorting out my emails and now it has come up again, in somebody else’s household. And here’s some tofu and potatoes research on the subject too. Read on… 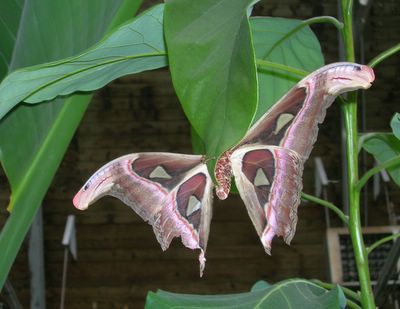 By pure dumb luck I stumbled upon a butterfly identification site and see that this is an Atlas Moth. Not a butterfly at all. I see that the wing span is from 8 to 11 inches.

This photo was taken back in May while on a visit to the Devonian Botanical Gardens close to Edmonton.

It’s evening time. The wind is getting up again. Huff, puff, and rustle, BANG! The house doors slam and papers fly across the table. And just as quickly it is still.  Save for the rustling trees, the humming fridge and sounds of children back in the play park.

Oh, but that the inner storms would come and go with as much ease! The huffs and puffs are, after all, just as air moving through the mind, catching and flying the thoughts like papers in a wind. And like the storm, if sitting still is part of the practice in our house, just as quickly all may settle down. Save for the gentle sounds of papers falling to earth! The echoes in the mind and they fade too, given half a chance.

Come to think of it, listening to the echoes fade rather than drowning them out with more noise is an excellent practice. I’ll have to remember that. There’s quite a bit of paper rustling in my mind this evening!

Evolving Space has been to the Hall of No-Form…in Singapore. 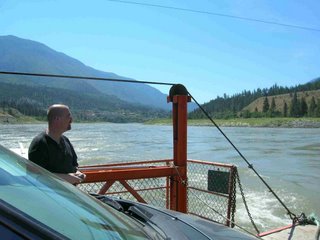 On the Resistance Ferry (AKA Reaction Ferry) crossing the Fraser River at Lytton, B.C.

I’ve generally resisted retracing my steps. Anything re or un in fact. Un-picking, un-packing, un-doing, re-making or re-moving. I usually attempt to find a way around, if there is a way around. And to-day there was no way around. I had to go back and retrace my steps. But not with out some mental resistance.

I’d just arrive back at the car park having had a picnic lunch, some distance away, among the sapling willows by the waters edge of our local river. Then only to find that my mobile phone had parted company with me. Only one thing to do, walk back to the picnic spot. About 40 minutes there and back. It was the only place it could be.

I’ll not treat you to the wild rationalizations as to why I need not go and fetch it, enough to say I went. But what spurred me on was catching sight of a slogan on the back of a tee shirt as it walked past in the car park. “Just Giver”, JUST GIVER! On the front of the shirt was an Oilers symbol. According to the Urban Dictionary Just Giver means, To give it all you’ve got!

In Buddhist practice terms Just Giver might well translate as, “Do the very best you can”. That’s no small thing and my Master would often say, “Do the best you can, that’s all you ever can do”. She didn’t say, “Do the second best”.

To resist however is a very human trait and to resist dealing with the consequences of ones actions is also common. Looked at positively the arising of resistance can be the very thing that gets ones attention and propels one forward. And that’s just what a resistance Ferry does . The power of the water flow hits the hull and drives the ferry across the river. The hull of the ferry does need to be skillfully angled to the flow of the water to drive it across.

Here is an old photograph of the ferry taken in the 1950’s.

Will it ever get dark? Really. At this latitude, up here in Edmonton, it hardly gets dark at all at this time of the year. The birds don’t know what to do with themselves and I certainly don’t either. It’s coming up to 10.00 p.m. and the sun is going behind the clouds. The world here is awake, alive and chirping. And so am I.

This evening I was taken on an outing to a near-by dog park, with dogs. Edmonton is blessed with huge areas where they can run free. They can even take a dip in the river, if they must. Doggie heaven. “Is that bear scat”? Bears in the city, surely not! Bending over, taking a close-up look. “Yep, that’s bear scat alright”. We walk on, a little more aware of the rustles in the bushes. Will it come out and ‘get us’? Probably not. Bears tend to be shy and retiring for the most part. All the same, bears in the city, extra awareness and care is needed.

Bears shy and retiring? Maybe. But not shy, and hardly retiring, the other weekend during the retreat in Lytton, B.C.

A retreatant and I were having tea and cookies on the back lawn on Saturday afternoon. All was peaceful. We were deep in conversation about spiritual matters. The bugs were buzzing but nothing drastic. The temperature was rising up into the 30 c range, yet not unbearable. A rustle under a tree in the underbrush at the edge of the lawn caught our attention briefly. ‘Ah, a deer resting in the heat of the day’. Then the fuzzy ears emerged followed by the long nose. ‘A bear’! For some un-thought-out reason we continue to talk, although I did take the cookie plate into the kitchen. The logic being, bears like to eat cookies not people…

Time passed. Suddenly a noise from the bushes and a flash of white and a hollow sound and the bear was up on its feet. Our harmless fuzzy friend had not been resting but privately wrestling with a cooler. What do you do? You chase the bear away, shout, throw firewood, wave arms. Show your very strong disapproval. So our one year old bear lumbered off into the neighbouring property and the cooler, much chewed upon, was retrieved.

BTW. This story is an example of how NOT to behave around wild animals. And, once again, a reminder for me of how easy it is to become involved in the rights and wrongs, shoulds and should nots of wild animal law. Good story though.

I once ventured to ask a senior of our Order what the extinction of suffering was. That’s the fourth of the Four Noble Truths. He said, ‘The absence of views’. This, of course, is linked to the final sentence in yesterdays posting. We are talking about the truth of no seperate self, not in theory, in practice.