Yesterday was a lake/hike/swim/hike/swim day. Formerly Beautiful Lake, Buntzen Lake near Vancouver is a great area for outdoor recreation. And it’s a marvel of early engineering to provide hydro power for Vancouver. The project was started in 1903 and continues to-day.

The project involved raising the level of the dam on Coquitlam Lake and excavating a 3.6 km tunnel to carry water from Coquitlam Lake to Buntzen Lake. The tunnel runs under Eagle Mountain, reaching a maximum depth of 1.2 km below the surface, and empties into the north end of Buntzen Lake.

With talk of tunnels I was reminded of Beyond the Pale of Vengeance.

“This novel is a compelling story of a Buddhist monk who undertakes a seemingly impossible task in order to fulfill his spiritual purpose to help those he had previously harmed. It shows how, in the process of converting his karma, he also transforms the lives of others. It is based on a true story from 18th century Japan.” A story of personal ‘revolution’ and how one persons act can change the lives of others, as well as their own.

Phew! One minute to go before leaving for the ferry to Vancouver Island. Such kind and compassionate hosts. Thank you, I’ll be back.

Never before have I checked in at an airport with a basket. A basket containing, essentially, a picnic! What ever was I thinking? But climbing up above the clouds, seeing the North Saskatchewan River snaking it’s way through the city, the sun glinting off the water, I was glad to be eating the picnic. Like in the olden days.

An aunt, now no longer with us, would tell of her early aviation adventures. “Yes my dear, we would dangle our legs, open up the picnic basket and have lunch”, “the wind blowing one’s dress you know…” “So VERY exciting”! “Yes, of COURSE, everything open-air”. That must have been the 1920’s. Later she was companion to the British Ambassador’s wife in Peking. “Yes. I did learn Mandarin, one should you know”. And “This very nice Taoist monk taught me to meditate, in the bazaar.”

Everybody would benefit from early exposure to an adventurous, unconventional aunt and I had two.

As a young monk, visiting my parents, the same aunt called me to her room. “Now my dear, I’d like you to teach me to meditate”. The story of the Taoist monk came out during this interview. I did my best to instruct her and afterwards, to my amazement, she pulled out a five-pound note and gave it to me. This recognition from my bold and unconventional aunt, her act of gratitude, meant a lot. Later we had crumpets with far too much butter!

Let us remember those adults who came into our early lives and whose stories allowed for, showed the possibility of, a personal revolution.

Revolution: A drastic and far-reaching change in ways of thinking and behaving.

Some years ago I learnt to refrain from complaining when getting into a hot car. It’s an almost involuntary reaction to exclaim, its like an over in here. Because it is! My priestly companion at that time had learnt to keep her mouth shut as a child because she, and her siblings, knew if they complained about the hot car there mother would start to complain. And not stop! Being such a strong taboo for the Reverend, and indeed not complaining a matter of maintaining family sanity, I too learned not to complain in sympathy for her. Not a bad practice. Why not try it? It would seem just about everywhere in the world is baking at the moment.

It’s been a tad too hot for thinking these past days, let alone driving. There have been all time highs recorded here in Edmonton. Phew! What a Scorcher. That’s the kind of head-line the newspapers in England would run during the silly season, with a picture of people frying on Brighton Beach with hankies on their heads to protect them from the sun. BTW, the silly season is “the part of the year when Parliament and the Law Courts are not sitting (about August and September)”.

I grew up on the south coast, east of Brighton, near Romney Marsh and with recent talk of trains I remembered the summer holiday childhood treat, that never happened. A ride on the Romney, Hythe and Dymchurch miniature Railway. Iain writing for Railway Roundabout remembers his ride on this train.

There are a lot of children around the world climbing into hot cars ready for family outings. Why not tell them about the complaining mother, and how and why the children learnt not to complain. Might make an impression on them, it certainly did on me!

These photos of the Canadian, which runs between Toronto and Vancouver, were taken in Jasper on the way back from the retreat in Lytton. I toyed with the idea of going to Vancouver on the Canadian however the cost, as well as basic practicalities, makes flying an all round better proposition. The ride through the Rockies must be quite something especially with those observation cars. 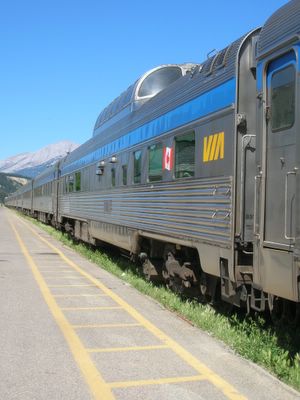 All curves and chrome, all the way from Toronto. 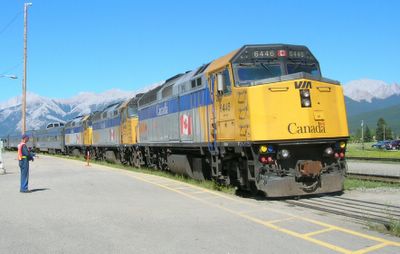 ….pulling out on route for Vancouver.
With the closing of one door new doors show themselves. The hard part is to keep moving towards the doors while, at the same time, not knowing what’s behind them….Boo!

Fear of the future.

And once through, what then? More doors, more choices. Then, looking back. BOO!

Regrets from the past.

I’ve a ticket to fly from Edmonton to Vancouver on Monday afternoon. 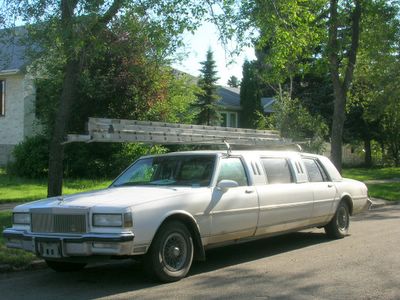 It’s late. Too late to do anything other than smile and sleep.