Thanks to Julius once again. He said he played it full screen with headphones on. The third movement is reported to be particularly intense.

This was originally left as a comments to an earlier post by Angie. Since there is so much here I thought I’d publish as a post in its own right.

People now love to visit Swaledale as one of the most magnificent Yorkshire dales for scenery. My dad always said it was very bleak when he lived there, especially in the long winters. There was a lot of depression & suicides were not uncommon. My auntie thought that was partly because of the brooding hills which seemed to overwhelm some people, & possibly also because of the effect of lead leeching through water pipes into humans.

My dad & his four siblings grew up in the 1920s & 30s, my granddad scraping for work despite his status as a stone mason, the family next door staying indoors on Sundays because they didn’t have any Sunday clothes to wear. People who didn’t have sixpence for the doctor just doing without. My auntie had a story about a man who broke his back at the quarry being brought home screaming on the back of a trailer & put to bed to die without any medication. My granny was very anti drink & ‘signed the pledge’ because families suffered great hardship if the head of the household spent essential money on alcohol.

Electricity made the Dales more acceptable. I still remember in the 1950s taking a candle to go across the yard to the flush (luxury) toilet – fun as a kid but not permanently as an adult. There was in time electric light in the living room but not upstairs so oil lamps & candles were used until the 1960s.

Transport was difficult – I know it seemed to take a long time for us to make the trip from Preston & later Keighley. Now it can be done in 2-3 hours. Then cars broke down & the moors seemed incredibly steep & empty, although as a child I enjoyed the fun of leaping out to open & close all the gates which were later replaced by cattle grids. Buses were on market day or for school in Richmond.

It was a hard life with work a central feature. The family kept some chickens to supplement their income & my granny ran Grinton post office which then included walking all around the dale to outlying farms to deliver letters & parcels, even on Christmas day. Church was a central focus – my auntie played the organ from the age of 14, her mother cleaned the building, her dad dug graves & was a church warden & her four brothers sang in the choir.

Two of my dad’s uncles came back from the first world war very troubled mentally. Their marriages broke up & one was seen around Reeth muttering to himself & writing words in chalk on the pavements. What a shock it must have been to come from a remote village to the battlefields of Europe & back again.

My dad was a conscientious objector in the 1930s when he first went to Oxford University, but changed his mind about pacifism when Hitler overran Czechoslovakia – as did many others. He heard great debates at the Oxford Union with all the famous politicians attending, including Winston Churchill & Vera Brittain. Two of his brothers remained C.O.s through the war which was difficult for his father living in a small community where it was still seen as cowardly not to fight.

Just why are those people flashing their lights? At me. Driving along this morning, the oncoming cars, the drivers, were flashing their lights. Something wrong with the car? Do I need to stop and see if something is flapping, or dragging along the ground? Something worrisome about the car I can’t see, but they can. There is something going on here. They are saying something, but what?

When something like this happens, drivers communicating something the tendency is to slow down and wonder and be warned. And that was precisely it. The message was SLOW DOWN there is a police vehicle up ahead with a speed camera aboard. Slow down or you will get a ticket! This all set me pondering the whole business of regulation generally. Not to mention the preceptual implications of warning other drivers about speed traps. I smiled inwardly because the police presence may not have caught anybody speeding but it did caused drivers to regulating each others speed. And that, after all, is the point of the police presence. To discourage drivers breaking the rule of the road.

My late father would become very animated when he saw signs on the side of the road announcing speed cameras. He was convinced they were not cameras at all, just dummy cameras. He didn’t like to be regulated like that. He felt it was regulation through deception. And I can see his point. Thankfully he didn’t speed up when he saw such signs!

I heard about a silent retreat where the participants agreed between themselves not to talk to each other. Sounds so simple. How else is silence to be maintained and held to if there is not mutual agreement to BE silent? This is self regulation. And that for the most part is how the sangha functions. Self regulation, guided by Preceptual truth.

My last thought: were those deceptive dummy cameras my father saw? Or was he deceiving himself? Love that dad.

This is for a regular reader, and her father just recently deceased. 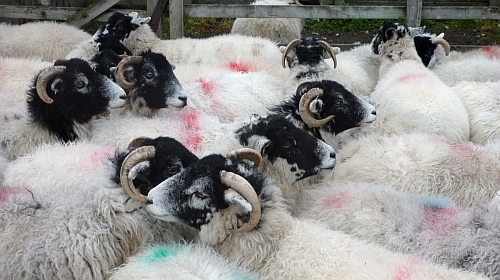 For those who spin
Yesterday I had a trip out over into North Yorkshire to join a lay/monastic walking/meeting group on a hike around Reeth. The rain held off, the wind was cold on the tops however when we descended and hiked along beside a river the sun came out. Briefly. Towards the end of our day we heard the sound of distant drum(s). Turned out it was a Remembrance Day Parade, headed by a band, returning from a neighbouring village church to the town hall in Reeth. For tea. The local vicar followed along behind the procession in her Land-rover. Later, congratulating her on her nifty reversing through the imposing stone gateposts of the vicarage, we walked up onto the village green together. Chatting. Well, that was my fourth Remembrance Day Service, she said. I know that one thoroughly now.. I’ve had that same sense, of relief, after a ceremony I’ve repeated a few times. Clad, as she was, in jeans, wellies, farm coat over a dark blue blouse with priest collar I found myself pleasantly inclined towards her. No doubt she was all dressed up for the service earlier on. And glad, like me, to be heading towards a steaming hot cup of tea.

I’ve include a picture of Swaledale sheep taken while passing through a farm yard. Cost you £15 for each photograph, the farmer quipped. Then WATCH YER BACK! as he released a tup from the nearby trailer. And for those who wonder what a tup looks like, or even is, here are some prize winners from a show and sale. And if you don’t want to follow the link, tups are boy sheep which in the Swaledale have very large curly horns.

After my pious words in my last post about moving within as the winter approaches you might be wondering if I actually meant what I said! Well yes I did and I do. One of our sayings, teaching sayings, is about the necessity to be flexible in ones day and be willing to move in (within) and move out (into activity). Reflexively. Out walking on the moors draws one back indoors, for tea.

There were severe weather warnings put out a few days ago of gale force wind and heavy prolonged rain fall. Where I am there were a few crashes and bangs in the night however in the morning there were no signs of damage. No chimney pots or roof tiles in pieces in the road or uprooted trees. All the same it was a wild 24 hours and I stayed indoors. Weather disturbances. There is every indication that Britain is in for another hard winter too.

And sitting here in the calm of this night I’m glad to be settled to sit through the weather of winter. And the weather of life too. Winter brings its call to settle, to reflect and to move within. Not that daily life discontinues, obviously, more a sense of moving deeper within oneself and being more indoors than out. Of taking this opportunity to move deeper as the nights draw in. Lighter later in the mornings, darker earlier in the evenings.