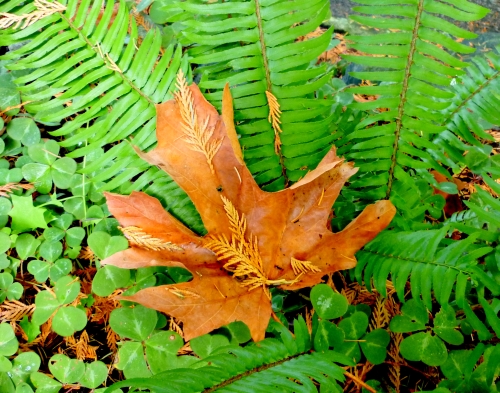 From the green leaves of spring and summer to the crinkly brown of autumn and winter
The sun is shining out of a clear blue sky here in Lancaster. We have already sung happy birthday, 80th at that, and now it’s presents and cards and laughter and fun. Later I’ll land in a town on the edge of the Lake District where I will be house-sitting until spring time. When the leaves will be budding out and I’ll no doubt be packing ready to travel again.

One of the joys of being part of a community is seeing children grow into adults and become parents themselves. And seeing fellows mature and mellow and grow in depth. Lay/monastic community, side by side and one behind the other – at the same time. We say that there is always a Buddha senior to us. This is about humility, and about bowing. I bow to my dear friend, and her partner too. 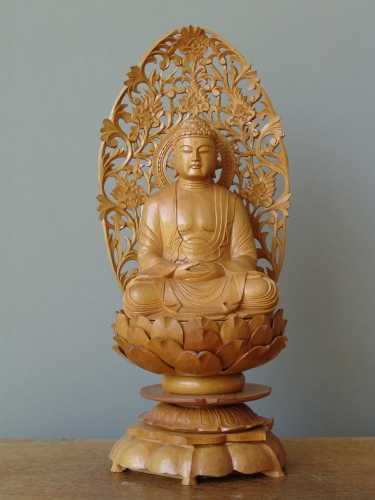 As I write this I can see, just to the left of my computer, a wooden carving of a Buddha on a lotus throne. It looks a bit bashed around and doesn’t quite sit straight – it never has.

Some years ago, I was looking around the bookshop at Throssel Hole Priory (as it then was) and saw a group of wooden carvings which, I think, had recently been imported from Hong Kong. I was particularly taken with a Buddha on a lotus throne with an intricately fretted and carved nimbus behind it. It was in three or four parts – the Buddha itself which was loosely do welled into a lotus throne made out of several layers of carved wood and, plugging in behind the figure on a flimsy wooden tongue, the carved nimbus. The other carved figures looked pleasing too, especially the one of Kanzeon with an upended water jug, but the one I really liked was the Buddha. Anyway it was too expensive for me at that time so I had to let it go but I did remark to the monk running the bookshop how attractive I thought it was.

A couple of visits later that same monk told me that the Buddha carving which she believed I liked had been bought but had been subsequently returned because the purchasers had discovered, when they got it home, that it was seriously flawed. Apparently it didn’t fit together as it should and looked crooked. Since it was now second hand, would I like to buy it at a reduced price? I did and here it is.

When I got it home I did a certain amount of improvement on it. I managed to make it fit together a bit better so that it looked almost straight and I glued some of the parts permanently so they wouldn’t go any further out of alignment. Then I varnished it and this turned the bare wood a rather nice golden colour. I placed it on the left of my computer, where I could see it and where, I assumed, it would be reasonably safe.

While I was replacing and updating my computer equipment earlier this year (faster horses, you understand) a power cable, sweeping across the table, knocked the little figure on to the floor where it broke into four pieces (different pieces from the original components, of course) and suffered a split where no Buddha statue should have one. Well, I restored it once again but, I’m afraid it’s now more crooked than ever. Every so often I turn the Buddha slightly on the throne and move the nimbus from side to side but it’s impossible to get everything straight at the same time.

Now, I expect you think, I’m going to start drawing parallels with the spiritual life or use this as an extended metaphor for my own training. Well, it’s OK, I’m not. Just straight Buddha, crooked Buddha, that’s all.

Thanks Tony for this article. And for those left wondering where about’s that split was where ‘no Buddha statue should have one’…. In my view it was the split dowel which affixed the statue firmly to it’s seat, the Buddha’s Lotus Throne. Now, I expect you think I’m going to start drawing parallels with this split and personal training… I’ll do that tomorrow! 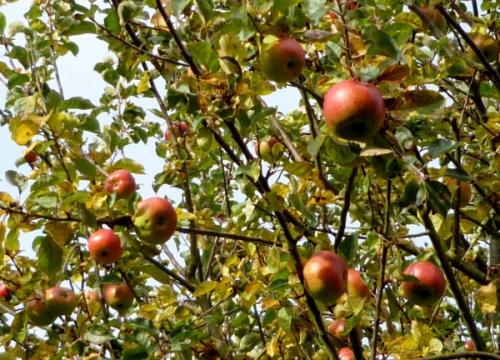 There was a bit of a wind here in Reading today…. 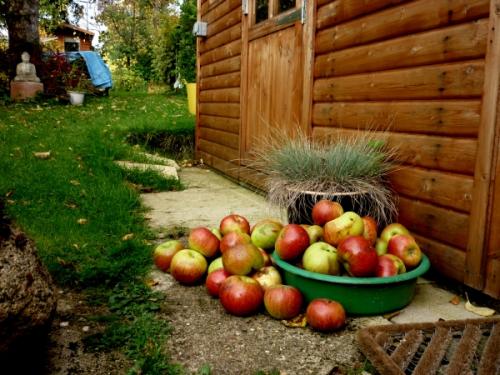 and the apple tree shed (ahem!) its fruit.
I’ve know this apple tree for twenty years. I’ve sat under it, relaxing on a Sunday afternoon, with worms and maggots dropping on me! And now it is laying apples! In between action in the Priory, mostly dealing with curtains today, I step out into the garden and gather up the wind falls. The best of them, in true chicken tradition, are the ones hidden in the undergrowth! 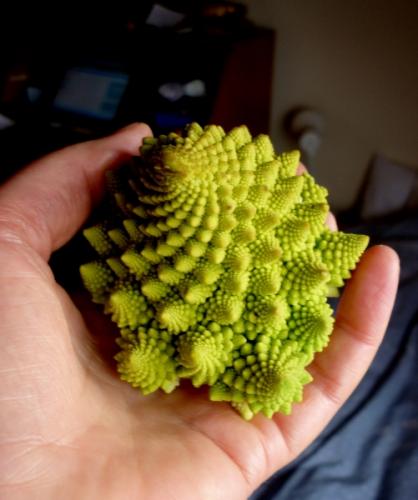 Because they appear similar at all levels of magnification, fractals are often considered to be infinitely complex (in informal terms). Natural objects that are approximated by fractals to a degree include clouds, mountain ranges, lightning bolts, coastlines, snow flakes, various vegetables (cauliflower and broccoli), and animal coloration patterns.
Fractal – Wikipedia

My preference is for savory breakfasts. Not everybodies cup of tea. Imagine my delight when I grasped hold of this piece of Romanesco Cauliflower this morning! Breakfast can be a thing of beauty and wonder. As well as being nourishing! Just what is it about fractal vegi, fractal anything? Perhaps something to do with infinity. Infinite, without measure. That which draws one in. We might talk about that which is without edges. And sometimes I use that expression to point to that which is. One might talk or think about the infinate and that have real and deep meaning personally.

This evening a bunch of people came for meditation instruction. Great to meet people wanting to give meditation a try. What is it that calls people to do that? We give that a word, we give words a try to describe what’s in our hearts. Words are what we have. Words give us an ever receding object to hunt around for until such time as the hunt is called off – and we just sit and touch our deepest heart – and then words come. And they too fall away.

Personally my breakfast vegi said it all to me this morning! What ever it expressed, it touched me.

Currently I am:
catching up with sleep and rest
slowing down from these past months of travel
looking forward to an extended period of rest/renewal/reflection/retreat……