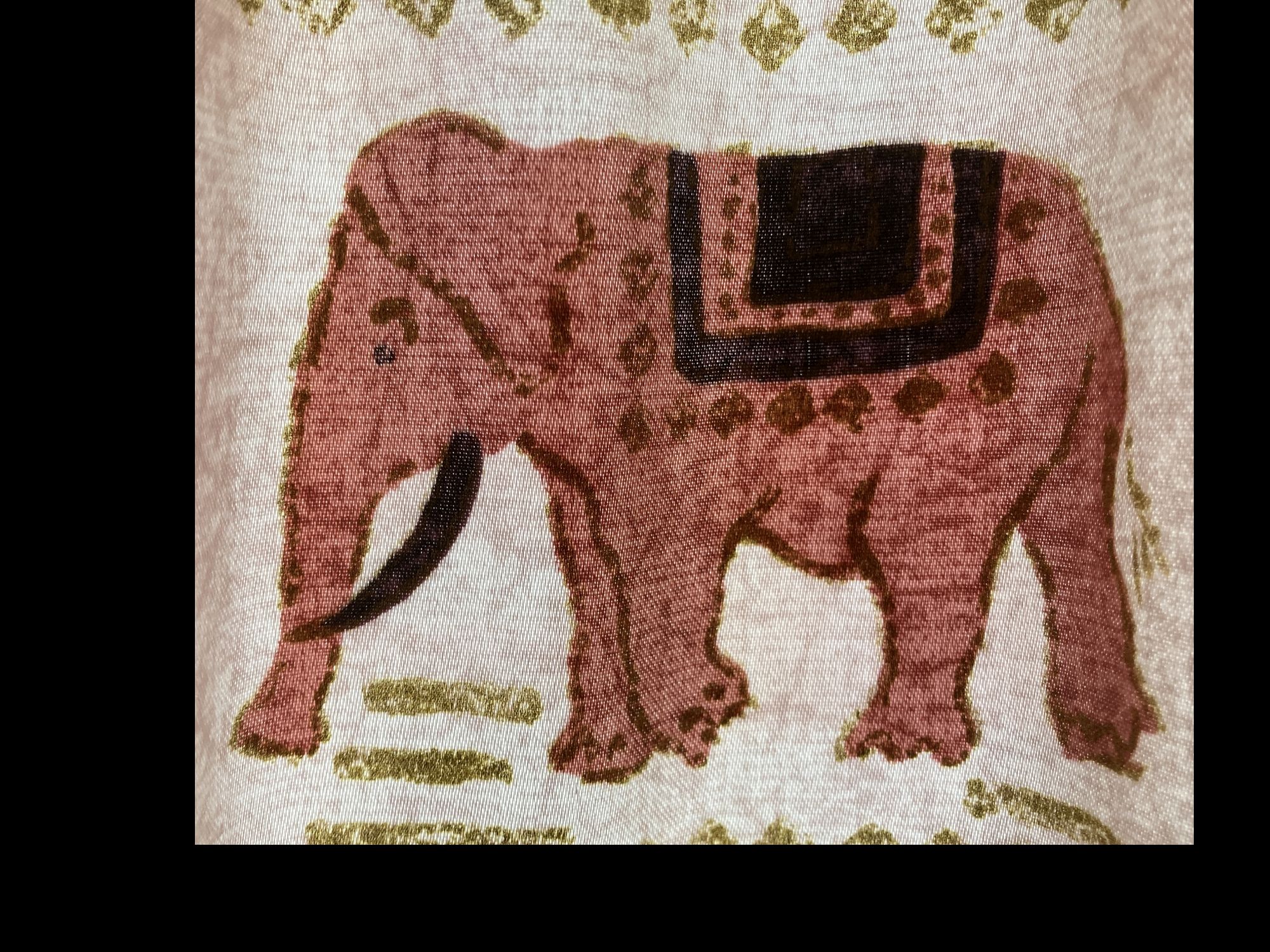 Here are the first two paragraphs of the Flower Ornament Sutra. Titled
The Wonderful Adornments of the Leaders of the World

Thus have I heard. At one time the Buddha was in the land of Magadha, in a state of purity, at the site of enlightenment, having just realized true awareness. The ground was solid and firm, made of diamond, adorned with exquisite jewel discs and myriad precious flowers, with pure clear crystals. The ocean of characteristics of the various colours appeared over an infinite extent. There were banners of precious stones, constantly emitting shining light and produced beautiful sounds. Nets of myriad gems and garlands of exquisitely scented flowers hung all around. The finest jewels appeared spontaneously, raining inexhaustible qualities of gems and beautiful flowers all over the earth. There were rows of jewel trees,their branches and foliage lustrous and luxuriant. By the Buddha’s spiritual power, he caused all the adornments of this enlightenment site to be reflected therein.
The tree of enlightenment was tall and outstanding. Its trunk was diamond, its main boughs were lapis lazuli, its branches and twigs were of various precious elements. The leaves, spreading in all directions, provided shade, like clouds. The precious blossoms were of various colours, the branching twigs spread out their shadows. Also, the fruits were jewels containing a blazing radiance. They were together with the flowers in great arrays. The entire circumference of the tree emanated light; within the light there rained precious stones, and within each gem were enlightening beings, in great hosts like clouds, simultaneously appearing.

Read it once, then again – slower. Then again even slower. In so doing one can’t help but join this expanded jewelled world. Not ‘join’ as one might imagine a desirable holiday destination! Born of desire.

For me, when I am prepared to slow down, read every word, I find myself IN the bejewelled lands. Or better to say – at peace. The discriminating faculty having faded, almost, out of consciousness.

This for me is spiritual reading. Not reading to feed the intellect, just letting the teaching seep in through one’s ‘pores’. Just as when listening to a Dharma Talk – spiritual listening?

AND you might say, ‘Who, is going to do the washing up’?!!! Can we not get rather too over involved, concentrating on, daily life, as what spiritual practice REALLY IS. The Sutra has quite a bit to say on the matter.

Hi there subscribers.
The last paragraph has been edited thus:
and when I read the above and the text that follows, (and much more), I think, as I said before, This is to be shared with Jade Mountain readers AND I need to listen more carefully to my voice, to know that a mundane blog post is actually far from mundane AND it’s not about ‘me’. So here I am again. 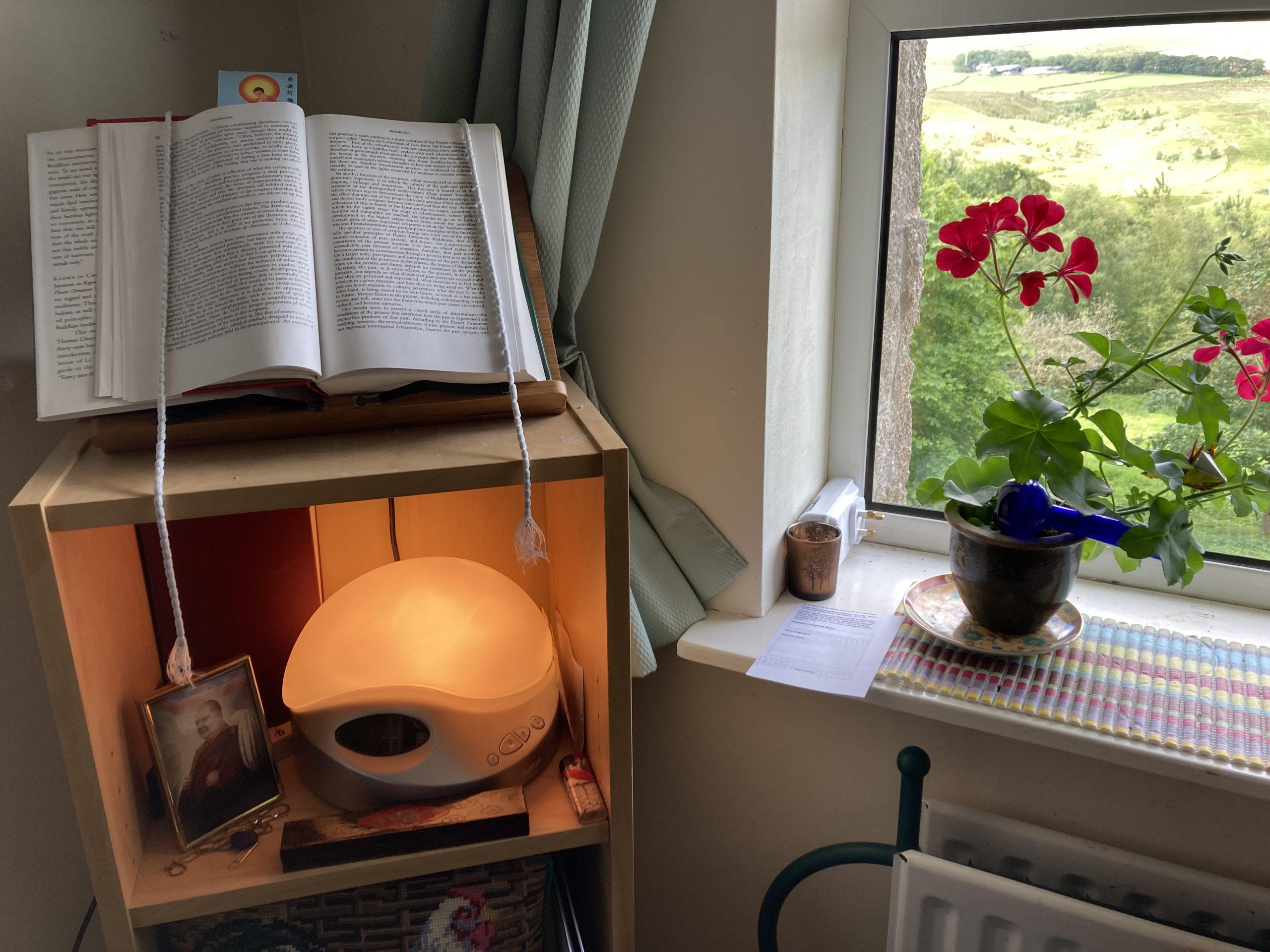 I’ve been reading the Avatamsaka Sutra, these past months while I’ve not been posting and actually I’m only just finishing the Introduction.

I rarely, if ever, tackle a huge book like this. Both physically huge and huge in its immensity spiritually. I bought a book stand as it’s too heavy to hold and some drapery weights to hold the pages down. I intend, but not always succeed, to read a few pages each morning.

Putting words to the impact of just a few moments with this book is near to impossible. Such is the case with spiritual reading.  Occasionally a sentence leaps out, and have the intention to write a blog post. Now is the time, it would seem.

The sutra makes reference to ‘Enlightenment Beings’. They are those who are addressed and who participate in the great drama of this scripture. Who are they?

From the Avatamsaka Sutra.

and when I read the above and the text that follows, (and much more), I think, as I said before, This is to be shared with Jade Mountain readers AND I need to listen more carefully to my voice, to know that a mundane blog post is actually far from mundane AND it’s not about ‘me’. So here I am again. 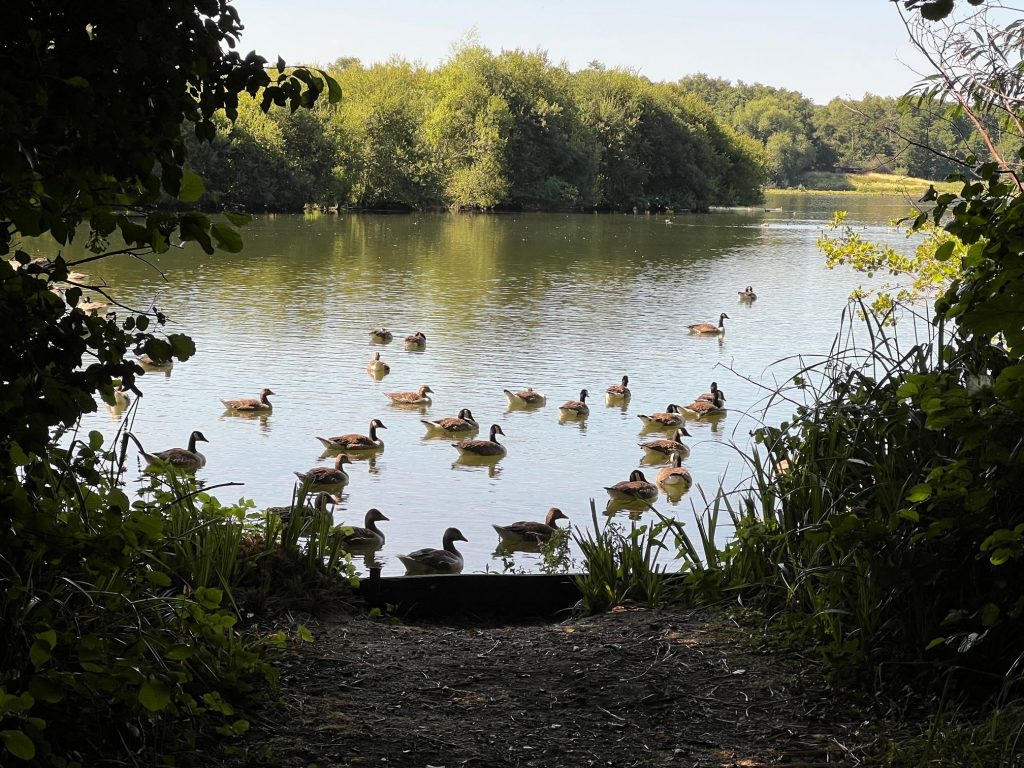 Julius has recorded his reflections Thoughts on Training, which include, what staying at Throssel was/is like for him,  the sangha refuge and his thoughts generally on training. All recorded to the charming accompaniment of the sound of Geese and his footsteps as he walks and talks beside a large pond in the south.

The monastery is open to guests, fairly much as usual, after nearly two years when retreats were happening via zoom and in person visits were limited to meeting people outside in our marque on the lawn. The community collectively is so happy and glad to have guests come and stay, both for retreats and for longer stays outside of retreat time, see our schedule of retreats here. As far as I remember, we opened to overnight visitors in February.

I have to refrain from becoming overly excited at seeing, and spending time with, people I’ve not seen for what feels like years and years. And YEARS! Julius, a loyal Jade reader and long time technical support for Jade, (and who I first met over three decades ago at Reading Priory)  recently came for a couple of weeks. I hope I managed to tone down my excitement at seeing him again, and if not I’m sorry! I’m human.

On a Personal Note: Tomorrow, I’ll write about what I’ve been thinking about and doing these past couple of months.