Let’s ponder the ways of the Emperor Penguin. 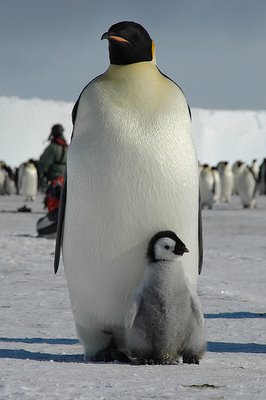 Taken by Bryn Jones from Bangor, Wales.
More of his exceptional pictures on Flickr.

I’ve just been watching the film, ‘March of the Penguins’ and everything about the Emperor Penguin is educational, and they are entertaining too. The life of these amazing creatures is geared around; staying alive on Artic ice, surviving harsh conditions as a community, hatching their eggs and then getting everybody back to open water again. Once the chicks are big and bold enough to swim, the parents leave!

I particularly liked how they have adapted their social habits to keep warm out there on the Artic ice.
To better fight against the cold of the Austral winter, the emperor penguins
have adopted social behavior patterns which allow them to save a lot of energy. The most striking adaptation is the huddle formation in which the individuals huddle against each other and form a very dense group. Only their backs are exposed to the wind, and they take turns so that the ones at the edge of the huddle formation gradually move towards the center where they will be more protected for a while, until they find themselves out on the edge again.
Text from the Warner Brothers official web site.

If there is a child in the house, or if there is not, you might want to go and test your ability to Save the Egg.

Native American wisdom has it that we humans can learn from the ways of creatures.

4 thoughts on “‘March of the Penguins’”