Shasta Abbey is close to Yreka, which in turn is close to the California/Oregon border. I had occasion to go through there a few days ago on my way to the Scott Valley to pay a visit. Driving up the Scott Valley you really get the sense of an area full of history. It was here that gold was found and a rush to mine it happened, making Yreka a boom town. The land I visited had been hydraulically mined. I think that means water is diverted and the gold washed out with water under force. You could see some of how that worked by the small canyons cut by the water. You could also see that the local bears had been eating lots of berries too! 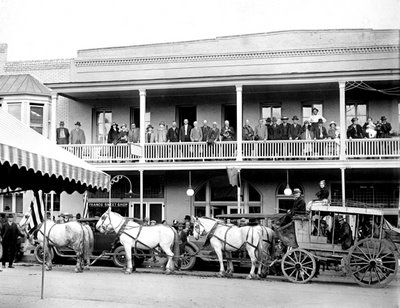 “Yreka was born when gold was discovered on the flats near a ravine called Black Gulch in March of 1851 by Abraham Thompson, a member of a mule train party enroute to Scott Valley from southern Oregon. Six weeks after the discovery 2,000 miners had arrived in “Thompson’s Dry Diggings” to test their luck. By May, the gold rush “boomtown” was composed of tents, shanties and a few rough cabins. Several name changes occurred until the little city was called Yreka, apparently a Shasta Indian word meaning “north mountain.” Incorporation proceedings were completed on April 21, 1857. “

Just as I stepped out of the car in Yreka there was a sound to send many heart a-flutter. A train horn blasting out very close by. The Blue Goose was getting ready to pull out with a cargo of tourists aboard. The site is worth a visit even if you are not keen on trains (shame on you!) as the animated train chugging across the screen is pleasing in itself.

And look at this:
Steam Engine Cab Rides:
2 seats per trip available: $50 each. No children under 14, and children 14 – 17 must be accompanied by a ticket holding adult. Reservations are recommended. Please note: Locomotive riders must have ear protection, (ear plugs can be obtained at the ticket counter).
Well I didn’t get to drive a train or ride in a cab. I did however get to ride in the back of a John Deere ‘Gator’. Perched in the business end of the vehicle I could observe the receding countryside through a veil of yellow dust as my guide shouted from the drivers seat. “That’s where they kept rabits”. “This is our land, it ends over there”.
* * *
Ask Me
Some time when the river is ice ask me
mistakes I have made. Ask me whether
what I have done is my life.
William Stafford