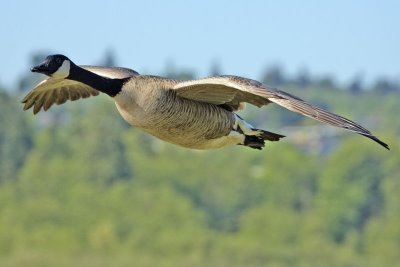 This file is licensed under the Creative Commons Attribution ShareAlike 2.5 License

I don’t know which way the Canada Geese are flying at the moment, south I presume. I’ll be flying north on the 16th September, north to Edmonton. Already I’m looking forward to that with happy anticipation; of seeing some of the congregation on Sunday morning, of lunch and meeting ‘Jazzy the Snorter’. I’ve already heard much about her, seen photographs too, she is a black pug who was recently rescued by a congregation member.

Yes, soon I’ll be migrating north from California, 16th September, and then eastwards across the vast continent of Canada. I’ll be touching down in Toronto briefly then onwards to London, Heathrow, landing September 20th at 6.50 a.m.

This blog was inspired by an email from a congregation member from Edmonton who wrote about the lake near her home where Canada Geese land and take off from. I’ll ask her permission to publish what she wrote. In the mean time do read about these wonderful, if unconventional, birds.

It has been really good to spend time with my North American monastic family at Shasta Abbey. And to spend time with many of the lay congregation who live around here or who are visiting. And daily there are those of you who plug in and fire up your computers and hike over to these pages to see what’s a goin’ on.

Constant as your presence is I remind myself and you, that all relationships end. Sometimes sooner, sometimes latter. Just a thought as I prepare to pack my suitcases, once again, and ready myself to take my leave.

One thought on “In Flight”