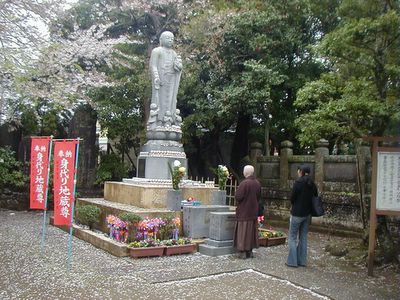 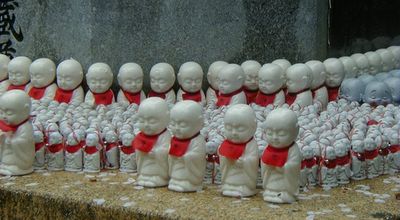 I’ve been keeping in mind an unborn child, and the woman who is carrying it. And the father too. When the child is eventually born into this world it will lead to death, the child’s death. Although the unborn child’s heart is beating now it will not be able to sustain life outside of the mothers body. This is a medical matter and the inevitable outcome is outside of anybodies control.

Yesterday I made two tiny white knots, knots of eternity, which will become part of a token kesa. That will be placed around the neck of the dead infant during a Funeral Ceremony. The token kesa represents the Buddhist Precepts, Buddhahood.

In the photographs you see a statue of Jiso with very many tiny white Jiso’s with red bibs on. The pictures was taken last year in Japan. Each little Jiso is a memorial for a baby or infant that didn’t live long in this world. As you can see there are offerings that children would like.

During the war, in an air raid in London, my pregnant mother jumped out of a window to save herself and a heavy man landed on top of her. The fetus aborted. In those days mothers were not permitted to see the dead fetus, perhaps it was thought ‘better’ for the mother not to see. My mother wanted to see, she couldn’t and that was a great grief for her. A few years latter I came along into her life.

So, the presence of all those little Jiso statues are a way to see, recognize and accept a death. Any woman who has had life growing in her and that life end, knows the utter devastating grief that is involved. The scene I am standing before in the first picture I remember well. It was a field of Compassion made manifest. Compassion is the appropriate response.

Do spare a thought for the situations described and for all such life dramas playing themselves out within Eternal Life.

3 thoughts on “An Appropriate Response”