We shall not cease from exploration
And the end of all our exploring
Will be to arrive where we started
And know the place for the first time.
~~ T.S. Eliot, Four Quartets 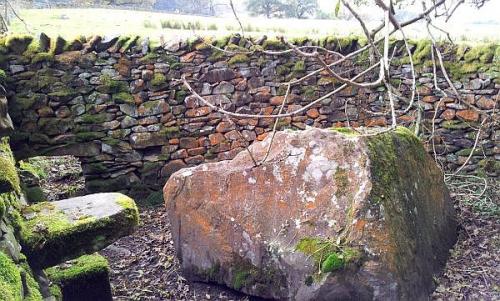 Sheepfold by Andy Goldsworthy, one of many.
I was out and about walking near Kirkby Lonsdale on Saturday. Patches of sun, cloudy spells and mud under foot! One of many surprises we encountered were the sheepfolds by Andy Goldsworthy the artist. They were near a village called Casterton. At first I couldn’t understand what they were all about. Why build a stone wall around a large rock? I thought. Then when we heard it was a Andy Goldsworthy piece, or pieces as there were 16 of them beside the path, I was even more wondering what it was all about! But then my walking companion pointed out the small opening for the sheep to get through and take shelter in the enclosure so then I understood they were not just art. The rocks took up about ten sheeps worth of room inside. The space between the rock and the wall would be cosy for a sizable group of woolie friends to shelter against the wild weather of winter.

My sense of Andy Goldsworthy is that he is helping us to revisit our landscape and see it as if for the first time. Just my thought of the moment. The sheepfold project ran from 1996 through 2003 involving the local community in the work.

This note added 26th October: Photographs of the Casterton Fellfoot Drove Folds as well as the full list of all the folds that were restored or rebuilt in Cumbria.